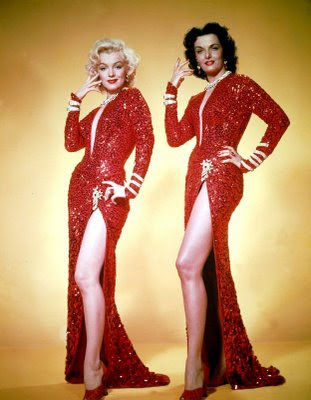 As I stated in a previous blog post, the Prytania Theater in New Orleans is one of my favorite places in the entire city. I headed there last Wednesday to catch Gentlemen Prefer Blondes (1953) staring Jane Russell and Marilyn Monroe. After the movie, I stumbled into a 45-minute conversation with two New Orleanians about the birth of burlesque culture in New Orleans around the mid 20th century, and how themes of burlesque are embedded in Gentlemen Prefer Blondes. Apparently, there is a man in New Orleans who is attempting to revive burlesque culture on Bourbon Street, and is employing classically trained dancers to perform alongside a traditional jazz ensemble. If I am not mistaken, Rick Delaup, a local New Orleanian, is the creative genius behind this revival. The New Orleanians, who I spoke with described the revival burlesque as a classy and sophisticated show that attracts a wide audience in the city.

Posted by Ashley's Adventures at 17:03