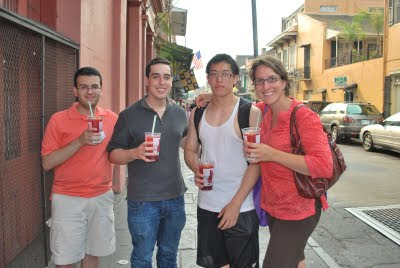 If you make your way to New Orleans for a weekend of fun in the French Quarter, you have more than likely heard of three drinks 1) The Sazerac (classic New Orleans cocktail) 2) The Hurricane (Pat O'Brien's infamous ruby red rum drink) 3) The Hand Grenade (New Orleans' "most potent" adult beverage).

After dining on po'boys at Johnny's, we made our way down Royal Street, watched a street performer do "magic" for a few minutes, and eventually headed towards Pat O'Brien's to draw another line through our NOLA bucket list: Hurricanes. I thought that Pat O's would be a single bar, but it is actually a series of bar rooms and courtyards. We stepped into a quiet and dimly lit bar room. The room was so dark, it was difficult to make out its decor. The walls may have been a dark green, or perhaps a dark purple? The details were lost to the inky darkness.

We ordered our drinks. The bar tender created them with ease: a healthy serving of rum (perhaps too healthy), Hurricane mix, a scoopful of ice, an orange slice and a single cherry. The drink was refreshing and strong. An oasis in a cup for overheated tourists. Drinks in hand, we strolled around the rest of Pat O's, taking a look in the courtyard, and peaking into one of the bar rooms that hosted live music. Before long, we stepped back out into the sunlight (a la New Moon), and made our way further down Royal Street, and then back up Bourbon Street.

The story of the Hurricane is entertaining. Apparently the drink was invented during WWII, and was aptly named "The Hurricane," when someone served the rum drink in a glass that was shaped like a hurricane lamp. Why is the drink rum based? Well, apparently rum was inexpensive and available during WWII (whereas other alcohols were in short supply). How do you use up all that rum? Make and incredibly strong cocktail!

A very touristy day in NOLA, but fun nonetheless!
Posted by Ashley's Adventures at 09:06