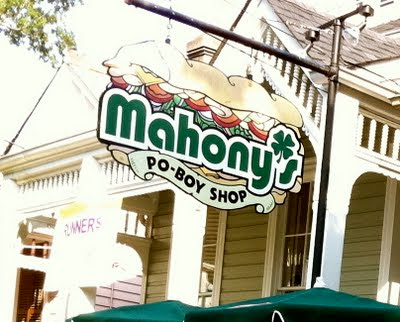 Mahony’s is one of the top PoBoy shops in town. Situated on Magazine Street in a brightly painted Creole cottage, Mahony’s is a major destination for po’boy lovin’ New Orleanians and tourists alike. You know that the place is popular because it has two doors: one labeled “in” and the other labeled “out” for optimal traffic control.

After grabbing drinks at Columns, we headed to Mahony’s for an early dinner around 5:00. I ordered the roast beef po’boy and swapped half of it with Qiao’s friend who ordered a root beer-basted ham and cheese po’boy. Both were delicious, but I still believe that Parkway Bakery makes the best roast beef po’boys in town!

When I went up to the bar to order an Abita root beer, I noticed that someone had spray painted something on the wall. It was an image of a man with sunglasses, a goatee and spiky hair. Upon closer examination, I realized that Guy Fieri from the Food Network had made his mark in Mahony’s, dating his trip to September 2010.

Keep an eye out on Diners, Drive-in and Dives for this New Orleans po-boy shop!
Posted by Ashley's Adventures at 18:48