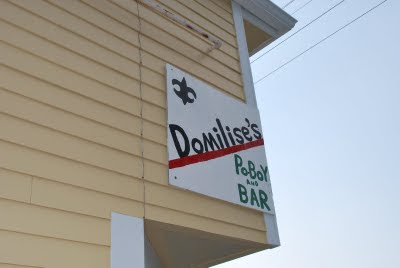 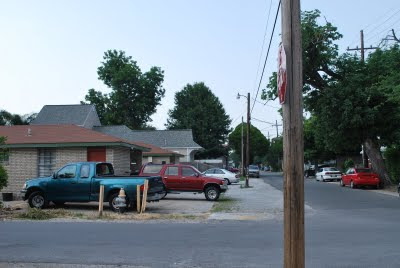 I have to admit, that I do not know New Orleans’ various neighborhoods well enough to walk around without a map tucked away in my backpack. I do my best to familiarize myself with the neighborhood before traversing the scalding pavement, but it is nice to know that I have a security blanket in easy reach.
A few days ago, I set off to eat an early lunch at Domilise Sandwich Shop & Bar (pronounced Dom-ah-lee-see), and was fairly confident with where I was heading (a residential neighborhood uptown). I made my way down Leontine Street from St. Charles, believing that Domilise’s was on the corner of Leontine and Ascension. Wrong. Domilise’s is sandwiched between Belle Castle and Ascension (just a few more blocks in the direction of the Garden District). I could have easily checked the map nestled in my backpack, but I was passing by a handful of New Orleanians at the moment I was lost, and did not want to reveal my unfamiliarity with the neighborhood. I so badly wanted to remain incognito (and “un-touristy”) that I continued in the wrong direction. By the time I turned the corner to peak at my map, I realized that I was still 10 minutes away from the po’boy shop (I still had to order and eat lunch too), and needed to turn around and head back towards Prytania before the movie started (I could grab a quick snack at Whole Foods on the way).

I was thwarted by my own insecurities—a non-native academic trying to settle into a tight knit and wonderful community. I still have a long way to go.

After the movie, I spent a few minutes memorizing my directions to Domilise’s and set off. This time I was successful. I turned onto Belle Castle, and had a brief moment of hesitation: the neighborhood was fairly sparse. It reminded me of the rundown steel mill towns that pepper the landscape around Pittsburgh. Could this be right? I searched the paneling of the buildings around me for the hand painted Domilise’s sign. Aha! There it is! Phew!

I steeled myself for the chaos that Domilise’s is famous for: the packed dining area, the crowded bar, the overwhelming smell of fried catfish, oysters and shrimp. I stepped into the door. Silence. What? Once my eyes adjusted to the dim lighting, I saw a young man standing by the bar and one of the workers taking her lunch at a table. That was it. Note to self: to beat the crowds even at the most infamous eateries in New Orleans, continue eating late lunches (after 2:00) in summer.

The young man strolled over to take my order. I opted for the “dressed” smoked sausage po’boy with gravy. Dressed meaning: lettuce, tomato, pickle and mayonnaise. The man skeptically looked at me, and quietly said, “You should get the smoked sausage with chili, not gravy.” I humbly agreed to his suggestion.

He carefully crafted the sandwiches: slicing the French bread in half; layering on lettuce, tomato, pickles and mayo as the halves of the bread rocked back and forth like cradles; skillfully laying the smoked sausage on top of the veggies; and swiftly closing the two ends of the sandwich together. At Domilise’s, po’boy making is an art, passed from one generation to the next.

After the trials and tribulations of my journey to Domilise’s, I felt that I deserved and ice cold glass of beer. One Miller High Life for me, please! I settled down at a linoleum table cattycorner to the woman on her lunch break. Before I knew it, we were immersed in an hour-long conversation about New Orleans, Madi Gras, my research, her life story, politics, sandwiches making, restaurants, and Katrina. This is the gift of late lunches in uncrowded restaurants: you get to connect with people who would otherwise be far too busy to look at you twice. Today was my lucky day!

Midway through my conversation with Mary Lou, I realized that I had not even tried my po’boy yet! The sandwich was stone cold at this point, but the bread was still crispy, the sausage still seasoned and the chili still spicy. Was it my favorite po’boy? No. But the atmosphere of Domilise’s and my conversation with Mary Lou far surpassed any po’boy eating epiphanies I may have had. Next time, I’ll try a more traditional po’boy: fried oyster or fried shrimp. 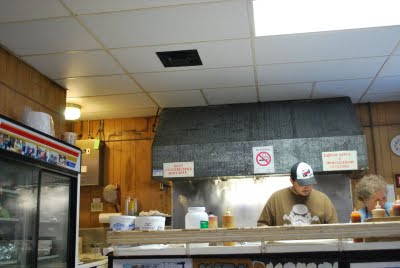 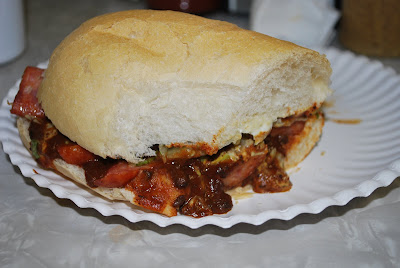 Posted by Ashley's Adventures at 08:45