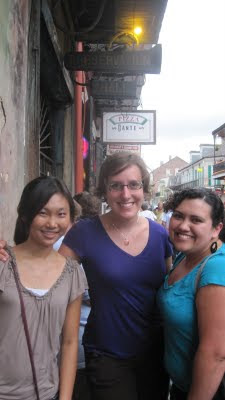 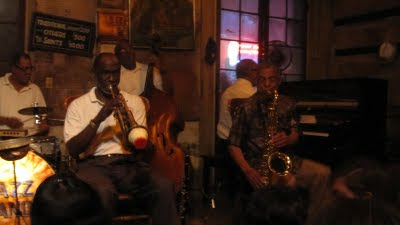 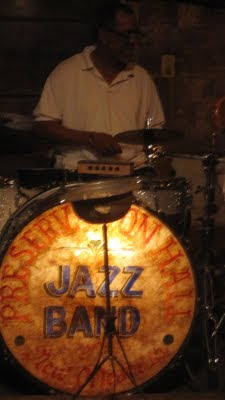 Last Tuesday, a few friends and I planned to head to Preservation Hall--a music venue in New Orleans built for the sole purpose of preserving traditional New Orleans Jazz (Arguably, one of the greatest contributions America has made to the world stage of culture). Like any great music or culinary venue in New Orleans, you have to get in line to get in. So, an hour and 15 minutes before show time, I arrived in front of the weathered wooden exterior of Preservation Hall. My friend Angela was there waiting for me (we were second in line!)
More and more friends joined us in the que as we waited to be admitted inside. By 7:25 about 35 people were lined up along St. Peter's, and by 7:55 there were about 50 would-be jazz enthusiasts eagerly peering over heads to see if the line was moving.
At 8:00 on the dot, the ticket master stepped out onto the sidewalk and bellowed: "Cash only! Exact change is greatly appreciated! 12 dollars! Cash ONLY!" Upon hearing his announcement, a tangible ripple of excitement ran down the que. We quickly started to file into Preservation Hall. The venue is quite small. Probably 20 by 30 feet. The band is set up on one side of the room, and an array of floor cushions, wooden benches and standing room make up the rest of the space. We snagged a great seat in the first row of benches. People filed in front of us, around us, beside us...the place was packed!
Soon enough, the emcee came in and gave a grand announcement. He threw out jokes like beads on Mardi Gras day...one after the other. He was charming. After a few seconds of silence, the band came to the "stage." I was sitting about 6 feet away from the lead trumpet. AWESOME!
The music was s-p-e-c-t-a-c-u-l-a-r! I would even describe it as magical. The improvinization had the ability to sweep you back to the 1920s--a musical time machine. The set is short and sweet and leaves you craving more: only 45 minutes! All of the musicians took turns singing in addition to playing their instruments...such talent! One audience member placed a large tip in the hat-shaped tip jar to hear "When the Saints Go Marchin' In." Everyone clapped along, and wooped with glee.
After the concert, a few of us decided to grab a late night snack at Camellia Grill. When we arrived, the place was virtually empty, but the staff was markedly more friendly at this location than at the Carrolton location. One of the waiters taught us a song he made up about Camellia Grill that had lyrics such as, "Come one, come all. To the downtown Camellia Grill!" We were his chorus, and we made up harmonies and what not. It was really fun. In the meantime we ordered burgers and split some pecan pie. The burgers were tremendously delicious, as usual, and the pecan pie a la mode was stellar.
What a perfect night in the Quarter! Go see Charlie Gabriel's Preservation Hall-stars!
Posted by Ashley's Adventures at 05:25