A Tour of the SoFAB Museum

Here are pictures from the Southern Food and Beverage Museum, so you can get an idea of what this great institution is like (Keep in mind that we are only a year old and still growing! Small steps....)

The St. Joseph's Altar--There is a relatively large Sicilian population here in New Orleans, so much so that its traditional to see altars dedicated to St. Joseph on March 19. The altars are decorated with breads that have been molded into beautiful images of crosses and other religious symbols: 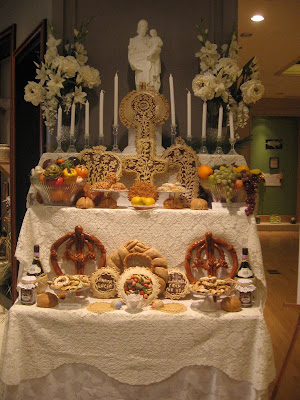 Here is the Cookbook corner where patrons can read cookbook dating back to the late 1800s as well as modern cookbooks: 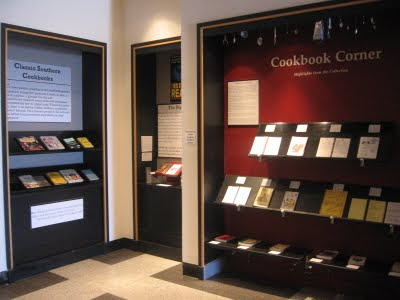 The Famous New Orleans Snowball. As mentioned before, if you think Hawaiian ice is delicious, you have no idea what you are missing with the New Orleans Snow Ball. Fluffy decadent ice is shaved in a machine like the one seen below. This ice is like a fresh Christmas snow: magical and perfect! 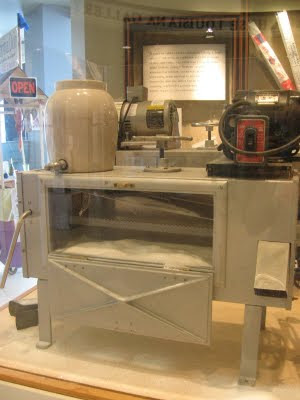 Pralines are also a New Orleans staple: the image scene in this exhibit makes my mouth water! 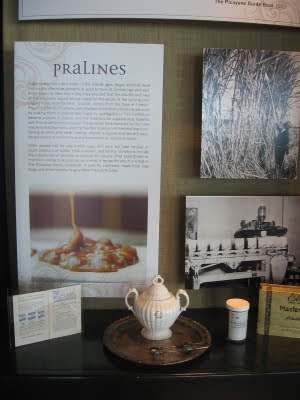 Leah Chase: This extraordinary women and food icon is known as the "Queen of Creole Cooking." She is also known for bright colored cooking smocks and her delicious home-style cookin'! 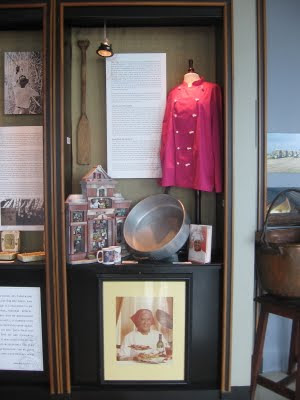 The Entrance to the Museum of the American Cocktail: 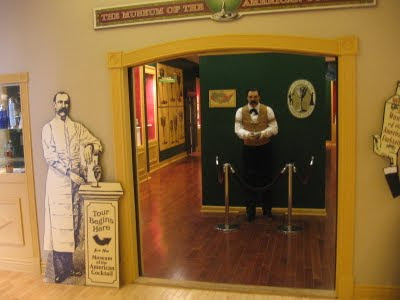 Martinis: As seen in the Museum of the American Cocktail: 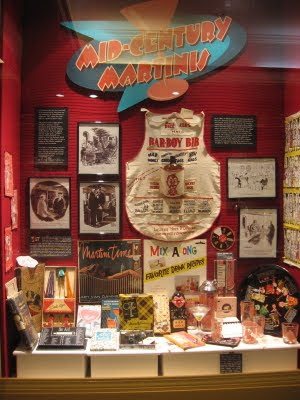 The White House Chef exhibit (one of 5 displays): 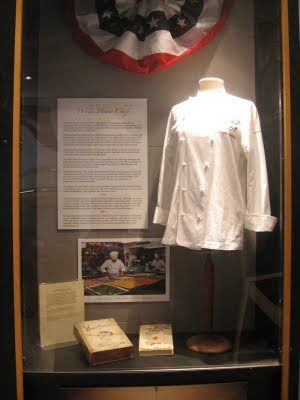 Overall, the museum is a fantastic space. It used to be a GIANT Limited (as in the women's clothing shop). But after hurricane Katrina, the Limited decided not to come back and that is when Liz jumped on the opportunity to utilize the space and bring the history of southern culinary tradition to life!
Posted by Ashley's Adventures at 18:56 No comments:

One of my projects at the Southern Food and Beverage Museum was setting up a state exhibit on Arkansas. Who knew that Arkansas is famous for its pink tomato or that Alma, Arkansas is the spinach capital of the world? Better yet- did you know that the Arkansas state cookware is the Dutch Oven? This my friends, its what food history is all about! Finding treasures in small town pride! Here are a few pictures of the exhibit done by "yours truly" 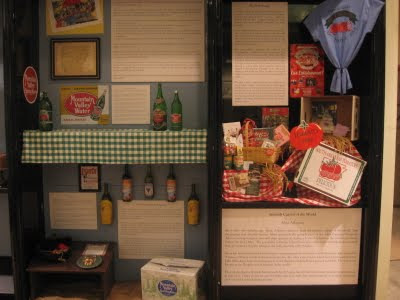 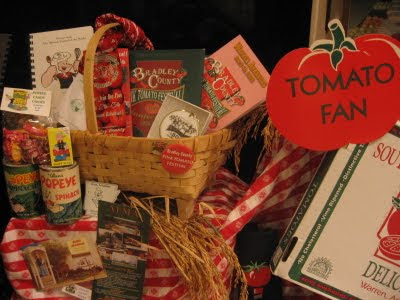 I also set up a small exhibit on the Laitram Automatic Shrimp Peeler which was invented by a teenage boy in the first half of the 20th century. The adapted washing-machine-shrimp-peeler he invented completely revolutionized the shrimp industry because the machine peeled shrimp 10 times faster than workers peeling by hand!

So we went out to the antique shops and found an old washing machine from the 1920s that is a similar style to the washing machine that this boy would have modified to make it into a shrimp peeler. You can see it below: 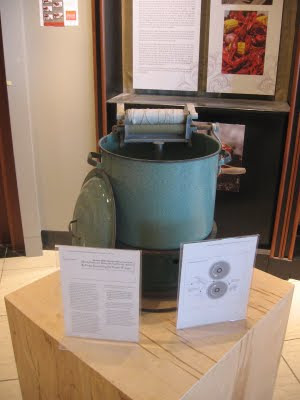 The basic principle: When you push a shrimp up again the turning rubber-wringer with the appropriate pressure; the rubber will grab the shrimp shell and not the meat, pulling away the shell from the delicious shrimp! YUM!
Posted by Ashley's Adventures at 18:32 No comments:

A Pittsburgher in New Orleans

This past weekend my mom and my Aunt Noreen came to visit me in the Big Easy! They came in on early Saturday morning and I met them at their cute little Bed and Breakfast on the corner of Washington and St. Charles. My mom and Aunt Noreen stayed in the Oak Alley Room (named after one of the famous Plantations of New Orleans) and when we pushed open the heavy wood door, a charming oasis waited for us, complete with gourmet chocolates on lace doilies and complimentary sherry and dainty crystal glasses. 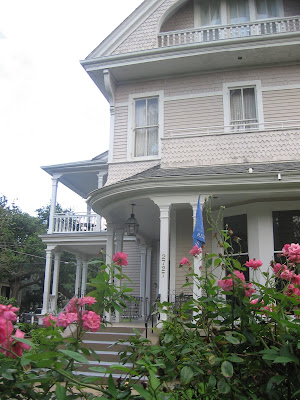 After we got settled in and took a little rest we headed over to Commander’s Palace for the Jazz Brunch. Commander’s Palace is right on Washington, about 4 blocks from St. Charles so it was an easy walk to the restaurant. We walked out of the sunshine and through the entrance and we were immediately engulfed by the air conditioning (I felt like I was walking into an old fashion ice box) We sat in the main dining room just to the right of the entrance. All of the tables had bushels of balloons on them- which provided a festive atmosphere (almost child-like...as if I expected Mickey and Minnie Mouse to pop out from the Kitchen and greet us table side...anyone who has been to Disney will know what this experience feels like).
I knew it was going to be a fancy experience when the waiter placed the napkin on my lap for me, but I had no idea about the incredible food experience that lay ahead. We all ordered the Jazz Brunch special-- I ordered Turtle Soup with Sherry, The Cochon de Lait, and the famous bread pudding soufflé known as the “Queen of Soufflé."
The first course came out with 4 waiters in tow. With an ease only accomplished through months of practice, the waiters -in perfect synchronization- poured the soup into our bowls. Then with the swish of the waiter's wrist, my turtle soup was magically dressed with Sherry and ready to eat. It was Delicious! The broth was rich and very creamy with a texture similar to that of bean soup. The flavor was also nice and strong with a good amount of salt (Just the way I like it!)
Then the main course came out and I almost died! It was a roasted pig's shoulder-pulled pork style-drenched in delicious gravy with red peppers and other vegetables. The pork was graced by the presence of two perfectly poached eggs drizzled with gourmet hollandaise sauce. All of this was sitting on top of a buttered southern biscuit! It was TO DIE FOR! I cannot even tell you how delicious this dish was and how much I loved it! The pork was so tender...the gravy so flavorful and the eggs and hollandaise sauce paired with the southern biscuit really added a unique texture to the dish. It was a circus of flavors perfectly coordinated for my palate. 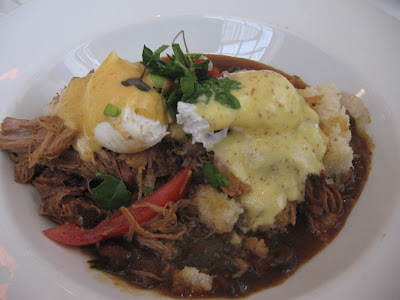 Then the DESSERT came and I think I may have died and gone to heaven! The soufflé was magical, but non challant, a pale creamy color with a sort of blush to the fluffy bread. Immediately after setting the dish on the table, the waiter broke the soufflé with one deft thwack of the spoon and poured whiskey cream sauce into the steaming pastry! The first bite was so magical, it was one of THOSE perfect food moments! I savored the perfectly balanced dessert. I was smiling while trying to chew while trying to exclaim to my mom and aunt how good it was! 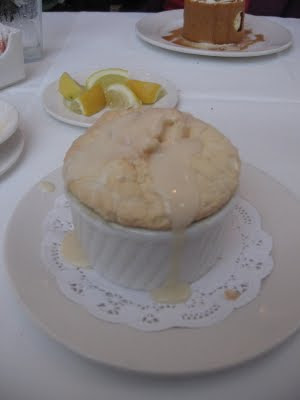 My mom’s pecan pie was EXCELLENT as well! The flavoring was so subtle- you could tell it was a REAL homemade pecan pie and not some fake store-bought pie. My Aunt Noreen had a great praline parfait that tasted like the Onassis dessert at Christos in Pittsburgh- the cinnamon honey ice cream encased by a vanilla cookie cylinder with whipped cream and pralines as dressing.
Then we left Commander’s Palace with our wallets a little lighter and our stomachs WAY fuller! 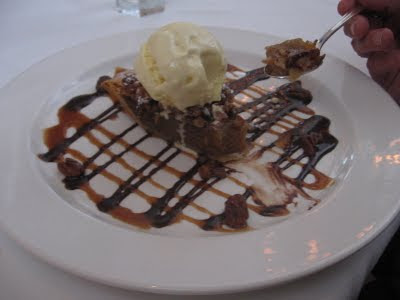 We took the street car down to the French Quarter and we did a bit of boutique shopping and we headed to The Historic New Orleans Collection Research Center to look at some New Orleans restaurant menus from the 19th century.
That evening, we met at my boss Liz’s house for dinner at 7:00. The food was fabulous. Chicken cacciatore with garlic bread and a side salad. Simple and delicious. A "little Italy" right in the middle of Louisiana! I wasn’t even hungry after Commander's Palace, but the dinner was very good and I really like the chicken dish (which I had never had before).
The next morning we went to the Prytania movie theater to see An American in Paris. It was a perfect Prytania-Classic-Movie-Day. We had delicious freshly popped popcorn which we munched on while watching a Bugs Bunny Cartoon (prelude to the featured film). Afterward we helped ourselves to the complimentary Coffee and cookies and headed back out into the sunshine in the direction of Magazine Street which is known for its eclectic boutiques and old school cafes. 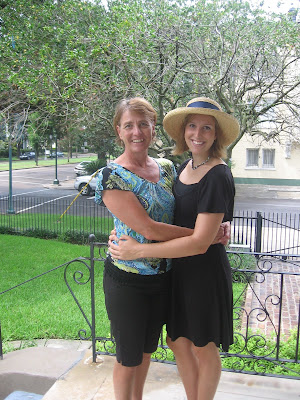 That evening, we returned to Commander's Palace (Because one time wasnt enough) for cocktails, appetizers, and dessert! I had the Oyster a la “Dom” which was absolutely amazing. It came out in a little ceramic bowl and inside was a cream sauce that was heavily flavored with tarragon and potatoes. The poaches oysters were bathing in this heavenly sauce and atop all of this was a crispy flaky pastry. The oysters were piping hot and plump- when you bit down on the oyster there was an explosion of flavor! We all got different kinds of desserts. My aunt Noreen had a chocolate volcano explosion type dessert, I had the bread pudding soufflé again, and my mom had a delicious peach and marzipan with mint sauce dessert. It was a perfect ending to a perfect weekend visit! Thanks for coming down to the Crescent City Mom and Aunt Noreen!
Posted by Ashley's Adventures at 20:08 No comments:

A date with Eliza Doolittle 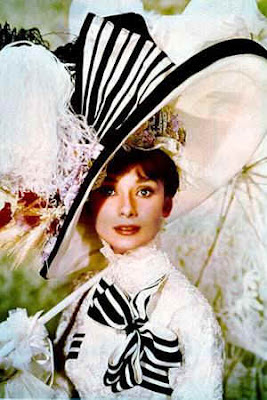 New Orleans is a magical place. Nowhere else do you have a city saturated with Creole culture, deep southern traditions, and a vibrant modern enthusiasm! This city has suffered because of Katrina, but the people who live here fight every day to keep their city alive. They seek to fuel New Orleans into the future while cherishing the warm embrace of their past.

One of my favorite examples of this ‘fantastic love affair with the past’ is the Prytania movie theater located uptown. This quaint one screen movie theater was renovated with loving care and as a result maintains its early 20th century charm. I recently went to the one of the theater’s Classic Movie Series pictures, My Fair Lady. The movie experiences started off with a cute little old man singing the “Warner Brothers- movie-introduction-score” into a hand held mic. Then he went into a little speech about the beautiful colors in My Fair Lady and how Cary Grant had turned down the lead role and how the roses in the beginning scenes are some of the most beautiful flowers he ever had seen. 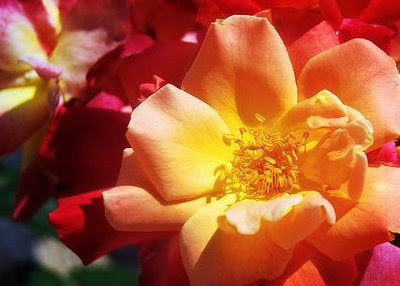 His little speech was charming and something that would NEVER have occurred in one of the mega-plex movie theaters that my generation has become accustomed to! To top of his little speech he announced that complimentary cookies and coffee would be served at the intermission of the movie (SUCH GREAT CUSTOMER RELATIONS AND A WONDERFUL TRADITION!). Hearing this, the whole audience was in a great mood as the pre-movie Bugs Bunny cartoon started. Without having to sit through any annoying commercials or movie previews My Fair Lady began to roll seamlessly just after the short cartoon ended.

I have to admit that I didn’t want to leave this wonderful place at the end of the movie! It was tempted to stay for the 4:00 showing of Harry Potter and the Half Blood Prince because I wanted to hold on to the magical mood that this charming theater had put me in (and it was not only me- all of the audience from the little old lady wearing a straw hat on my left to the young teen with a pierced lip and Converses to my right- thoroughly enjoyed the movie and the old-world-charm of the theater). The Prytania theater is exemplary of the wonderful culture and tradition that one can experience in New Orleans. I cannot wait to visit it again soon!
Posted by Ashley's Adventures at 13:48 1 comment: