Hubig's Pies, the Other Moon Pie 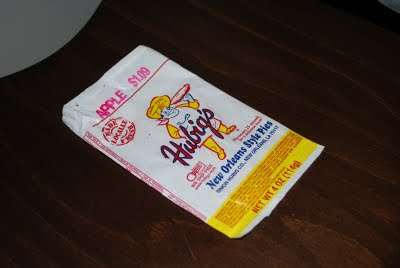 For those of you out there unfamiliar with Hubig's pies, they might be likened to the New Orleans' version of Little Debbie brand desserts--that packaged sweet that can be eaten right out of the wrapper. Although, most New Orleanians would tell you to zap the thing in the microwave for about 10-25 seconds and then top it off with some vanilla ice cream for an a la mode treat. All in all, New Orleanians are absolutely in love with these pies which come in an assortment of flavors: apple, lemon, pineapple etc.
Typically described as glazed moon shaped pies, these desserts have a sweet/salty taste to them that is difficult to describe. I applaud anyone who can fishing a whole Hubig's pie without suffering from a stomach ache afterwards.
My favorite part? The crinkly white, yellow and red wrapping which crackle as you unwrap your dessert. Or better yet, the hot pink price stamped at the top edge, "Apple, $1.09!" The wrapping is just so lively, I love it!
Believe it or not, Hubig's pies did not start in New Orleans. They originated in Cincinnati, moved to Fort Worth, Texas in 1914, and eventually settled in New Orleans. New Orleans was the only city in the United States that fell in love with these crescent desserts, and thank god for that. They have become an important part of New Orleanian culinary history and I am always glad to see those garish bags propped up on a shelf at the corner grocery (believe it or not, Walmart sells them now too).
Perhaps there is more than one reason they call New Orleans "The Crescent City." Then again, maybe not.
Posted by Ashley's Adventures at 18:11