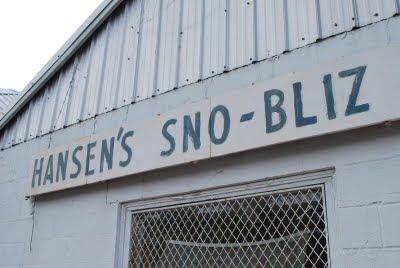 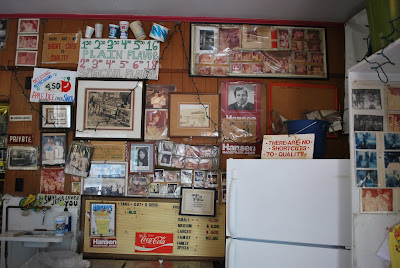 There is a culinary feud going on in New Orleans. It all depends on what side of the sno-ball question you stand. Do you support Hansen’s or Plum Street? Having lived on Loyola’s campus two years ago, I was just a few blocks away from Williams Plum Street Snoball. I had my first wintry date with Plum Street, and we’ve been going steady ever since. However, like an indecisive teenage drama queen, I felt the need to explore my options and give Hansen’s a try. So, after grabbing a po’boy at Domilise’s I trudged town Tchoupitoulas Street (pronounced “Chaw-pa-too-lus”) until I found Hansen’s. I had no idea where I was going, but I felt that I would stumble across the sno-ball stand soon enough.

The doors were wide open, I walked into the shop and was immediately entranced by the Pepto-Bismol colored cement floor. There was a 3-inch wide marigold yellow line painted on top of the pink floor to guide sno-ball fanatics towards the counter (this landing strip was used to keep order in the hot summer months when 20 or more people might be vying for a spot in line. Chaos!) There was only one person in line, and I followed the golden strip like a lemming, ooching towards an unknown culinary abyss. Ready to take a leap of faith?

I introduced myself to the Hansen’s gang: two young women dishing out syrup and a young man operating the famous Hansen’s Sno-bliz ice shaving machine. They were incredibly friendly, and let me know that Hansen’s was giving a lecture down at the Southern Food and Beverage Museum later that month (sadly, I’ll be in Canada by that time!)

The sno-bliz operator asked me what size I wanted. I heard the New Orleanian in front of me order a “3.50.” I glanced over at the size chart for sno-bliz cups and figured out that the size corresponded to the price. I opted for the “1.50.” When people filed in behind me they all ordered the “3.50”—moderation is never the case in New Orleans. I better build up my tolerance for bigger desserts!

Then, one of the young women asked me what flavor I wanted. Oh no! Decisions, decisions! After a moment of anxiety, I blurted out, “Cherry….wild cherry!...with sweetened condensed milk.” She smiled at me and said, “Good choice.” She was handed a half filled cup of shaved ice, she doused it in syrup, handed it back to be filled with more shaved ice, doused it again, passed it back to be domed with one final helping of shaved ice, then drenched the whole thing with syrup and sweetened condensed milk. Layering is Hansen’s trademark. As the sign hanging below the window says, "There are No Shortcuts to Quality."

I walked around the store, looking at photos, newspaper clippings and handmade signs while I dug through my sno-ball. Sweetened condensed milk is a must. I snapped a few photos, and went outside to sit on the bench with the other New Orleanians enjoying their guilty pleasure desserts.

Who do I prefer? Plum Street or Hansen’s? I don’t think I am ready to divulge my decision just yet. 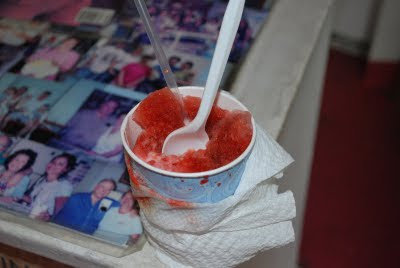 Posted by Ashley's Adventures at 09:01