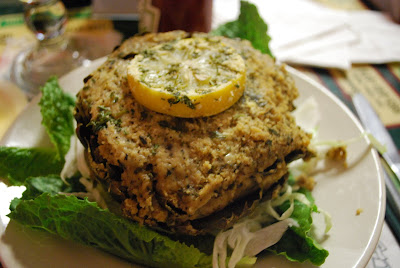 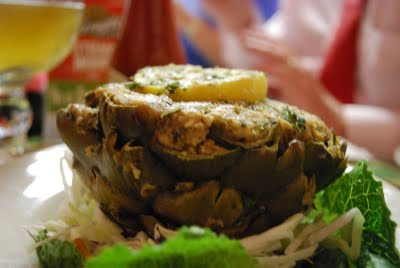 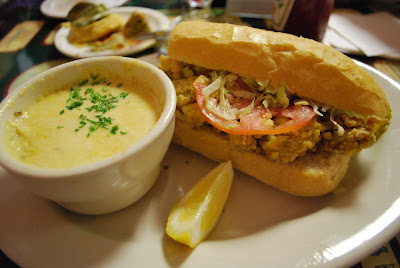 At a Bulldogs in the Big Easy event a few weeks ago, I met a Yale aluma named Fran. She just returned from class reunions in New Haven: the week long celebration when thousands of alums flock back to Yale for various class reunions...5th! 20th! 50th! Fran is a go-getter, and right off the bat she was enthusiastic about my project. She offered to take me to lunch to meet a fellow Yalie named Tim who happened to be 1) Creole 2) a trained chef 3) a lawyer. How do Yalies do so much?

A few weeks went by, and I did not hear from Fran. But, at the beginning of this week, I got a message from her saying that she wanted to follow through with our plans. So, she did all the legwork and planned a lunch for us. When I say us, I mean Fran and several of her native New Orleanian friends. What a treat! The best way to learn about New Orleans' food is to eat with the natives, and now I had the chance to have lunch with 5 of them!

Fran wanted to take me to an area of town that I hand't been to: Midtown...the large chunk of land that surrounds City Park (one of the largest city parks in the United States). She opted for Liuzza's, a Creole Italian place that serves Red Gravy (so you know it's fusion cuisine: the best of the bayou meets the tomato vine). Many French Creoles find Red Gravy (a roux-tomato sauce combination) to be an abomination, a bruise on an otherwise perfectly ripe fruit of Creole cuisine. I on the other hand, love everything and anything that is Italian, or part thereof.

Liuzza's has been in New Orleans for a while (since 1947). The exterior of the building can be described as follows: white brick, pink and green neon fixtures...yeah. That's about it. It's a typical New Orleans eatery. Similar to the ambiance of Domilise's: newspaper clippings on the wall, sturdy wood furniture, and wood paneling straight out of 1968.

The whole table opted to get beers in "iced goblet." Refreshing! The table also shared onion rings and stuffed artichokes. Now, in New Orleans, people take their vegetables three ways: fried, smothered or stuffed. I knew I had to try the stuffed artichoke because the dish can only be described as a labor of love: one has to push bread crumbs into all the crevices of the spiky leaves and then bake it! One word: yum!

I also opted for the lunch special: half a po'boy and a cup of soup. Fried oyster, dressed and the shrimp and artichoke bisque please! The soup was delightful: very creamy, but light. The oyster po'boy --as all oyster po'boys are-- was fantastic.

Did I mention that one of Fran's colleagues might be able to introduce me to Chef Paul Prudhomme? Also, Chef John Besh was eating at the table across from ours...another sign that Liuzza's is a winner.
Posted by Ashley's Adventures at 20:42