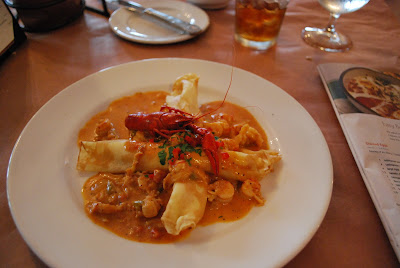 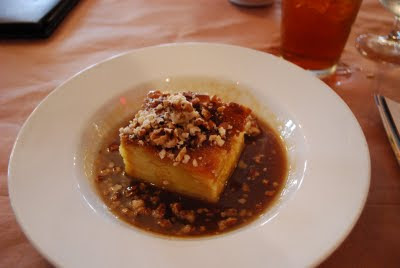 A storm is coming. You can almost feel the electricity flitting through the air. It is quite unsettling, but at the same time, New Orleans really needs rain. Don't get me wrong, it has been humid for the past few weeks, but the humidity is only there to taunt us. An unfulfilled promise. Today, we are all looking up to the murky grey skies praying for a drop of rain. I'd give it a few more hours before the deluge washes over us.
This afternoon, I grabbed a late lunch at Muriel's restaurant right on the corner of Jackson Square. I originally planned to stop by Cafe Amelie, but it only serves lunch Wednesday through Saturday. After wandering aimlessly around the Quarter for 15 minutes, I passed by Muriel's and was happy to stop in.
Muriel's reminds me of a modern Antoine's with its expansive and numerous dining rooms, and white linen table clothes. Whereas Antoine's was established in 1840, Muriel's is relatively new to the city of New Orleans, and was established in 2001.
The restaurant sits on one of New Orleans' most historic locations: the original colonial settlement which was built up around St. Louis Cathedral (an area now known as Jackson Square). This corner plot was originally granted to Claude Trepagnier as a reward for his participation in the expedition party led by Bienville to established la Ville de la Nouvelle Orleans in 1718. Over the next two centuries, Trepagnier's land was purchased by a number of people: Jean Baptiste Destrehan c. 1743 (Royal Treasurer of French Louisiana Colonies); Pierre Phillipe de Marigny c. 1776 (plantation baron); Pierre Jourdan c. 1788; Julien Poydras c. 1823 (President of the Louisiana State Senate and Director of the Louisiana Bank); Theodore Leveauc. 1881; Peter Lipari c. 1891 (opening the Alec Lanlois Saloon on location in 1895); Frank Taormina (opening a pasta factory, and restaurant called the Spaghetti Factory).
During the 1970s the Spaghetti Factory was converted to the Chart House Restaurant on the second floor, and the bottom floor was turned into Heritage Hall, the home of the Heritage Hall Jazz Band. Lastly, in 2001 Muriel's Jackson Square opened its doors in March, serving traditional New Orleans Creole and Cajun cuisine.
Having been converted from a colonial era home (many of the original walls have been restored), the restaurant is rumored to be home to several ghosts, of whom "Antoine" is the most inquisitive and active. The restaurant has a dining room on the second room named "The Seance Room," because of the numerous sightings of a ghostly aparation. After my lunch, I made my way to the staircase at the side of the restaurant. There was eerie Gregorian chant music being plaid in the dimly lit staircase and my heart began to race. This is ridiculous, I thought to myself! I'm 23 years old and should not believe in ghost stories! After a few moments, I mustered some courage and made my way up the creaking stair case, all the while hyper aware of the eldritch music swirling in the background. Once I got on to the landing, I realized that there were about five more dining rooms upstairs (all empty). I quickly peaked in a few of them, rushed to the open courtyard to feel the light on my face, and steeled myself to visit into the seance room, which was ominously cast in a red light at the end of the hall. I scuttled over to the door way, glanced at the plush red velvet seating, and the gild framed paintings. I could feel my hair stand on end as I stared into that crimson void. I quickly turned around and ran down the stairs. I was so relieved to be released from the spell of that room. I'm not saying there was any spirits there, but the atmosphere was entrancing, and it put me on edge!
Anyway, on to the food, which was the best part! I opted for Fontana's West End Turtle Soup to start. It was nice and briny, with a rich coppery brown broth. The waiter came out with the soup in a metal cup, and then poured it into the ceramic bowl in front of me (like they do at Commander's palace). He asked me if I would like my turtle soup dressed with a dash of brandy, and I agreed. He replied, "When in Rome, do as the Romans do." This made me chuckle, because I couldn't help but think of Anchor Man. I wanted to reply jokingly, "Please, go on..."
For my entree, I ordered Crawfish & Goat Cheese crepes. These are goat cheese filled crepes topped with fresh crawfish in a buttery sauce of chardonnay, onions, tomato and bell peppers. It was heavenly. I honestly, don't know how to describe it other than that. What I loved most about the flavors in this dish, is that they never lost their vibrancy. From the first bite to the last, they flavors were rich and tantalizing. The dish came garnished with a boiled crawfish on top. I am not sure if I was supposed to eat this crawfish, but I felt inclined to be as "New Orleanian" as possible. So, without ever having eaten crawfish before, I did the best I could to dissemble the crustacean, and find the best meat. I even sucked on the crawfish head. I think I surprised my waiter, when he came by and saw me with the crawfish pressed against my mouth. So much for being demure.
For dessert I opted for the bread pudding. When I ordered the dessert, my waiter commented, "Good choice! And is that 'all that she wrote?'" Trying to keep a straight face, I simply replied, "Yes." The bread pudding came out with a buttery brandy sauce. The dessert was topped with a pecan crumble topping. Divine! I'll be thinking fondly of Muriel's for a good while.
If you spot any ghostly orbs in the following photos, let me know ;) 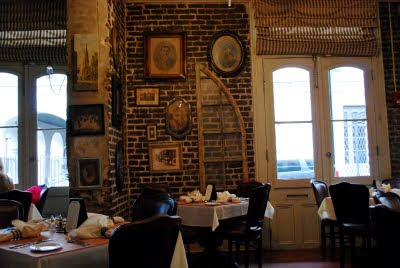 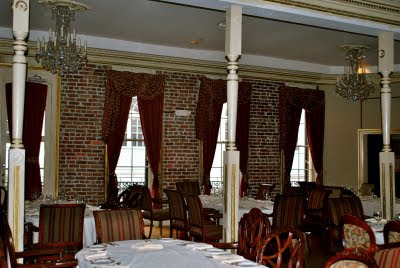 Posted by Ashley's Adventures at 12:42