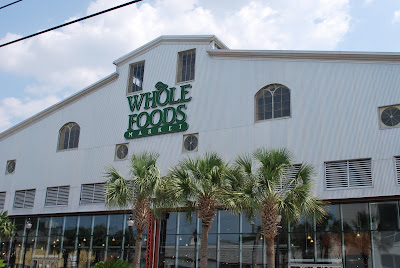 The local grocery store scene in New Orleans is dominated by the hometown favorite, Rouses Supermarkets (not to be confused with mythical swamp creatures of The Princess Bride (1987). For small groceries I stop by the Rouses on the corner of Royal and St. Peters (That's right. There is a grocery store in the heart of the Quarter...just one block down from Bourbon Street, and right across from the somewhat acclaimed Gumbo Shop). For larger shopping trips, Liz and I drive out to the Rouses on Magazine Street.
When Whole Foods built their mega store Uptown, there was an uproar among New Orleanians who fought tooth and nail against the grocery corporation. They argued that New Orleans' economy thrived off of local family-owned businesses, and Whole Foods had no place in New Orleans proper! Regardless, Whole Foods renovated the historic Arabella Station, and stuffed its interior with exotic passion fruit from overseas, organic grass-fed beef from the midwest, and locally brewed Abita beer. Foodies throughout New Orleans grappled with their inner critics: on the one hand they wanted to support local grocers, on the other hand they could not pass up the opportunity to purchase pea shoots and star fruit. Whole Foods made its mark on the city. Although some still vehemently oppose its presence, many have come to accept the chain as part of the changing landscape of the Big Easy.
When I came back to New Orleans this year, I noticed that a Pinkberry had moved in across the street from Whole Foods. Its seems Whole Foods has paved the way for more mega businesses to move into the city, or at least it seems to be attracting other national chains to claim their space in New Orleans redevelopment.
Posted by Ashley's Adventures at 20:08