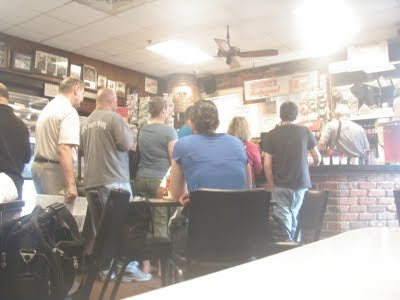 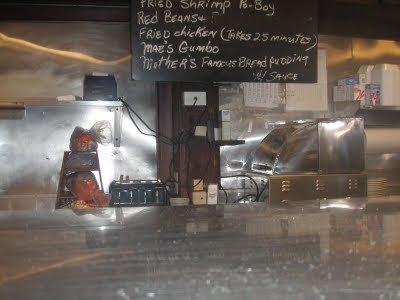 Mother's is one of those institutions in New Orleans that always has a line no matter what time of day....I remember the first time I passed by Mother's nearly two years ago. I was with my friend Connie, and she said that I had to go to Mother's!
It took me a while to get there, but the other morning I stopped by for a late breakfast. I opted for the Jerry's omelet, which came with a biscuit and grits. I didn't mind standing in line: people watching combined with the ephemera on the walls was entertainment enough. One of my favorite kitchy artifacts with the Budweiser clock: shaped like an old fashion carriage with eight horses pulling it along an invisible track. This clock might have seemed out of place in another restaurant, but it fit right in to the Mother's scene.
The menu at Mother's is quite special. The back of the menu tells the history of Mother's and also shares the restaurant's Katrina story. After one month, many of the Mother's restaurant staff moved back to New Orleans in September. Many of the them lost their homes in the storm, "so nine FEMA trailers were secured and set up in our parking lot. Our mother's family, Pat, Shirley, Lydia, Sandra, Roland, James, Betty, Duke and Philip, along with their families, constituted a new little neighborhood next door to the restaurant for the next nine months." On October 15, 2005, Mother's reopened to the public. The menu states, "Vice Admiral Thad Allen, the head of the disaster relief effort in New Orleans, was our first customer."
My favorite quote: "The power of food, especially New Orleans cuisine, to comfort the soul and nourish the spirit as well as the body, is amazing but a fact witnessed here in the ensuing months as returning locals and the wonderful disaster personnel who flocked to our city frequented Mother's in droves." 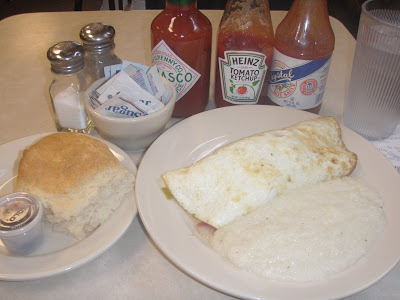 Posted by Ashley's Adventures at 12:49