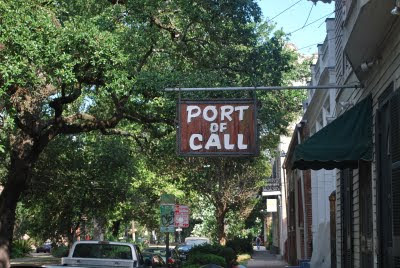 Ages ago, Scott Sullivan, the head of the Yale Club of New Orleans told me about the burgers at Port of Call. He exclaimed: "Why, they are the simply the BEST burgers in New Orleans! You must go there!"

Naturally, I placed Port of Call on my growing list of "must eat" places in New Orleans (this list now exceeded the length of a typical loaf of French Bread, and is approaching baguette length). Two days ago, I tried to go for a late lunch at Cafe Amelie to find that they were only serving cocktails and olives. Now, I have nothing against cocktails and olives, but I was in search of something a little more substantive. I then decided to grab a simple meal at the local Rousse's. I did my grocery shopping, got in line, and was told that "the bank" was malfunctioning and the store could not accept any debit or credit card purchases...what?!? At this point, I was blinded not by rage, but by hunger. How could this be?

Without really knowing where I was going, I headed back home, and decided to walk the extra blocks to Port of Call. The bar doesn't look like much: brown siding, shuttered brown windows...a brown sign with big white letters spelling out "Port of Call." I had a bit of trouble finding the door (it was around the corner), but I eventually made my way in to the nautical underworld that is Port of Call. I honestly could not see a thing when I walked in because it was so dark. A hostess sat me at one of the tables next to the bar. The whole dining area was lit with red light bulbs. There was something quite disorienting about the rose colored room and fish net draped ceilings. After about 10 seconds, a waitress came to my table asking me what I wanted. I ordered a cheeseburger and a a bottle of Abita Amber (I was still on edge about my culinary misadventures with Cafe Amelie and Rousse's and thought a nice cold beer would ease my mind).

After about 15 minutes the burger, in all of its glory, was ready. Cheddar cheese had been melted over top the all-beef patty. A 2 inch high stack of tomatoes, onions, and pickles was ready to be placed on top of the burger. When I crowned the patty with the top bun, the burger measured about 4 inches high. Dig in! The burger was great: nice and smokey, and cooked medium well. Did I mention that the side dish was sour cream with some baked potato? They literally put 3/4 cup of sour cream on my baked potato...

I only made it through half of my burger and 1/4 of the baked potato before the food coma started setting in. I called it quits and headed home. When I walked out of Port of Call, a huge waft of greasy air followed me, and I could smell the chargrilled scent of the back kitchen...yup, Port of Call has the best burgers in town... 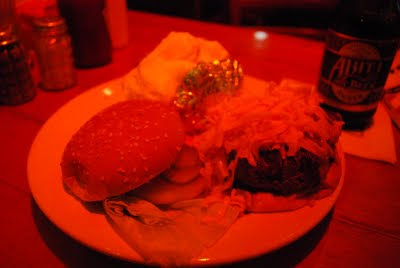 Posted by Ashley's Adventures at 15:10