I had a "double header" in the open hearth kitchen this past week. On Tuesday, I headed up to Baton Rouge for my apprenticeship at Magnolia Mound and on Wednesday I made my way to the French Quarter to cook at the Hermann Grima House kitchen. It was fascinating to juxtapose these two cooking traditions. The Magnolia Mound kitchen is modeled after a c. 1830s kitchen built in the countryside; the the Hermann Grima kitchen dates to c. 1850 and was a grand city residence. The families who lived in these two homes were relatively wealthy for their time and the supplies and gadgets they had in their kitchens reflect that. The Hermann Grima house, however, truly shines as a top of the line kitchen. The kitchen is located in the back courtyard of the main house. This courtyard would have functioned as a garden/orchard for the family. Today, citrus trees and various herbs are grown there. There is also a large cistern to catch rainwater in the back of the courtyard. Below, you can see the servants quarters - the kitchen was located on the ground floor of that building): 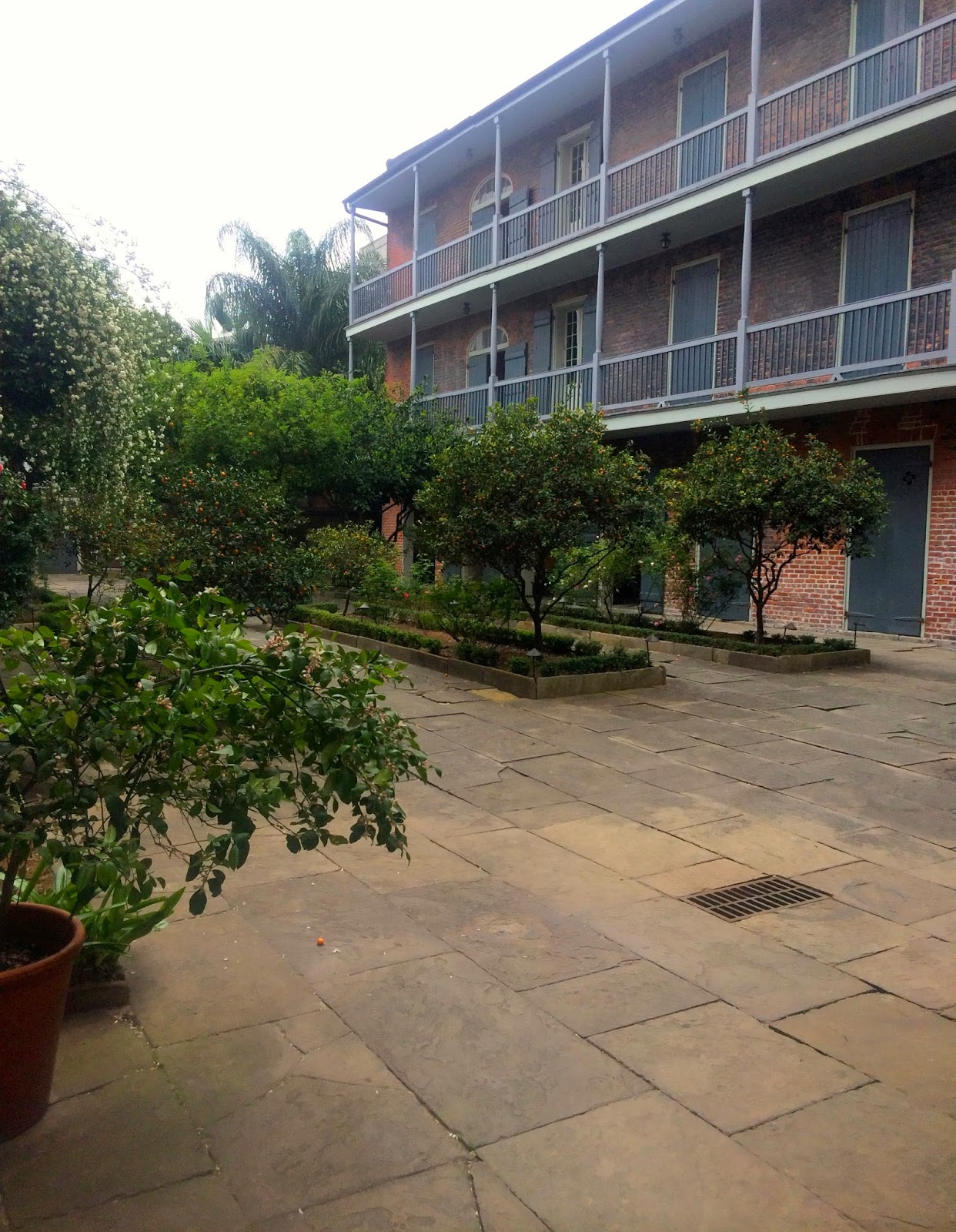 The kitchen has a raised open hearth and a bee hive oven - a dome-shaped oven developed during the middle ages in Europe. Similar to the brick oven at Magnolia Mound, you have to burn a fire in oven for about 4 hours before it is hot enough to bake in. 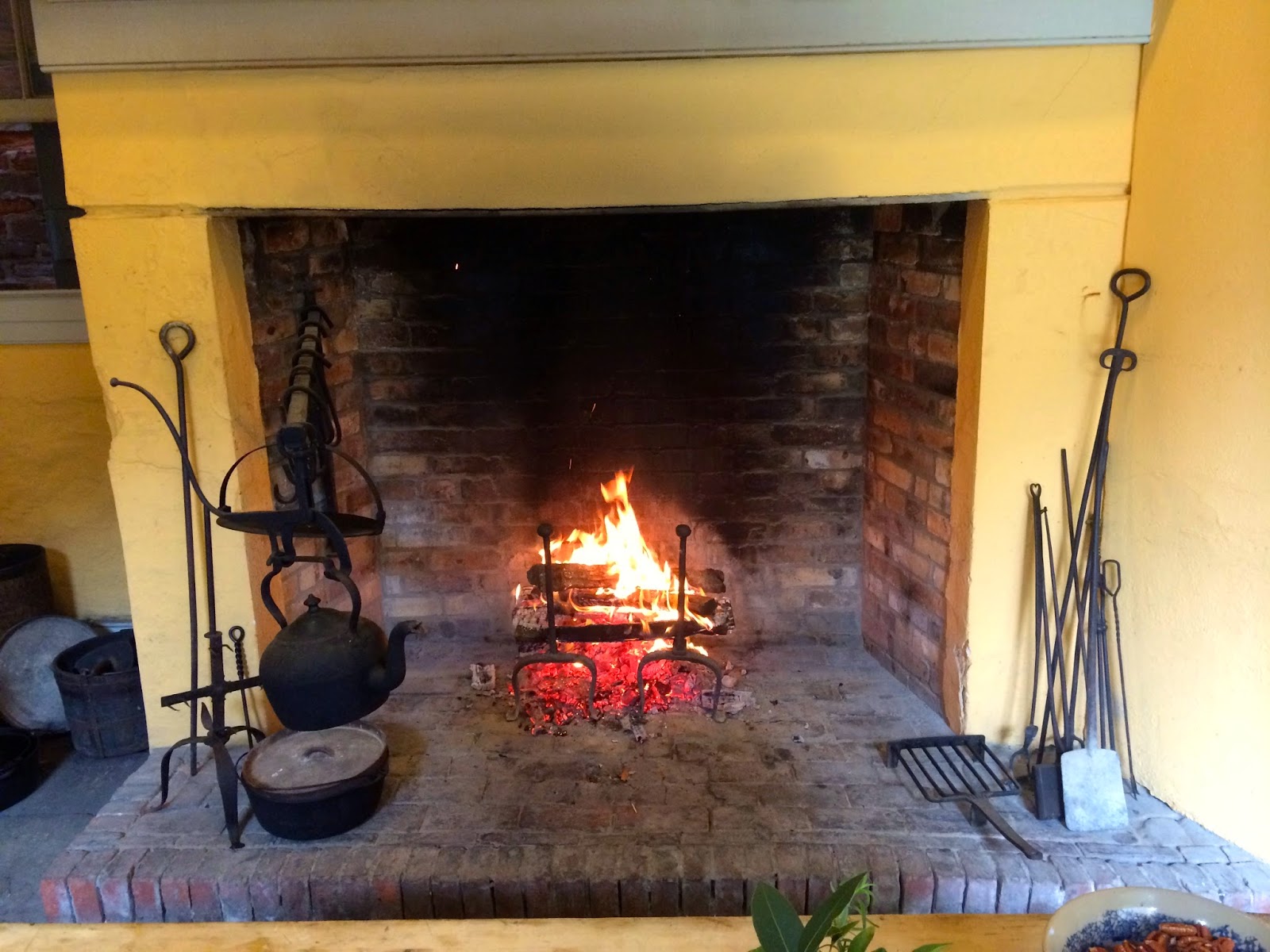 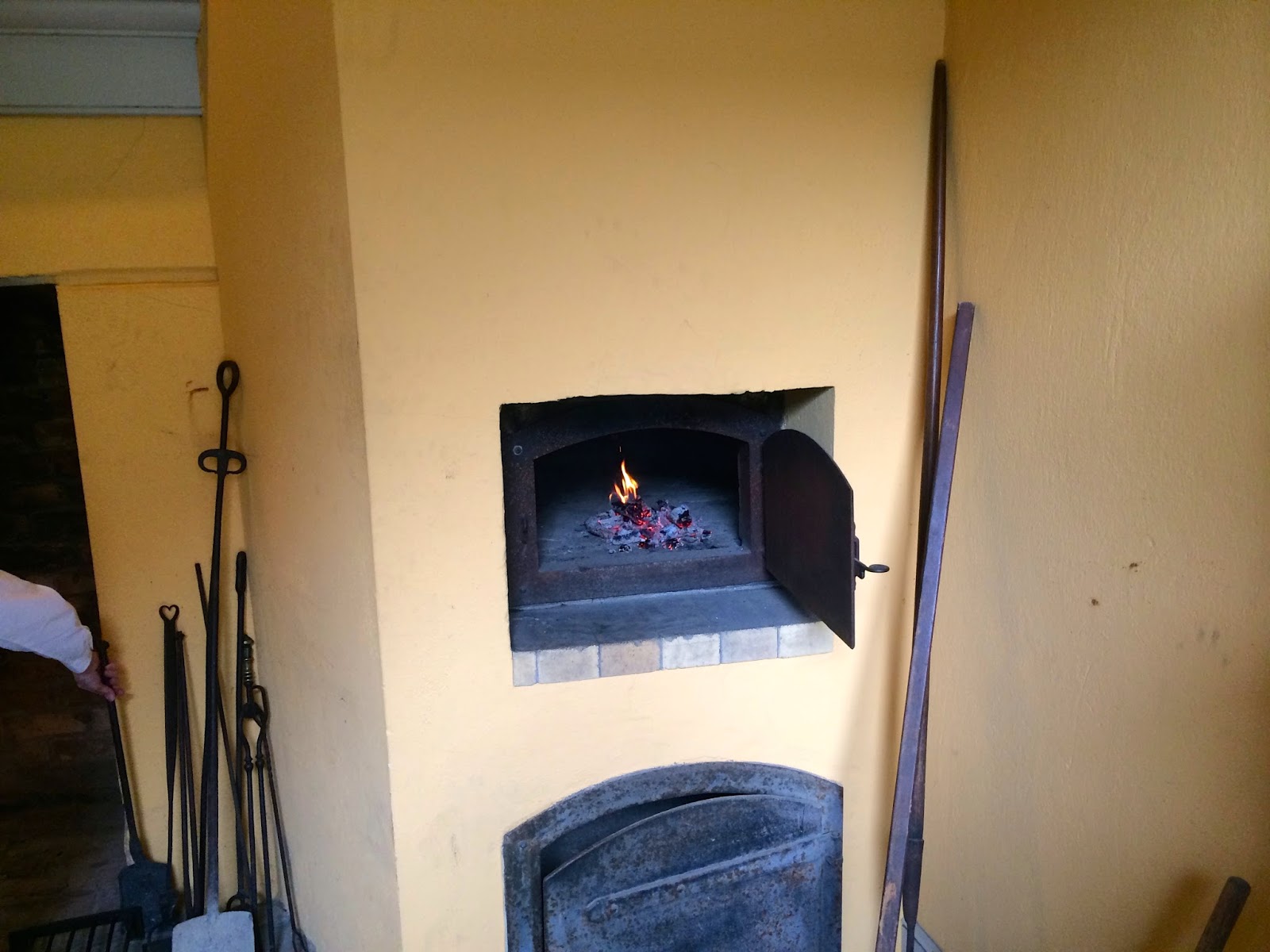 The kitchen also has a potage - the 1850s version of a stove top. The potage has 4 "burners" or metal basket where you place hot coals from the wood burning fire, kindling (pine cones), as well as coal. Once that fire gets going (typically by fanning it), you cover the metal basket with a metal grate and then set you pot/pan on top of that. And voila - a burner! 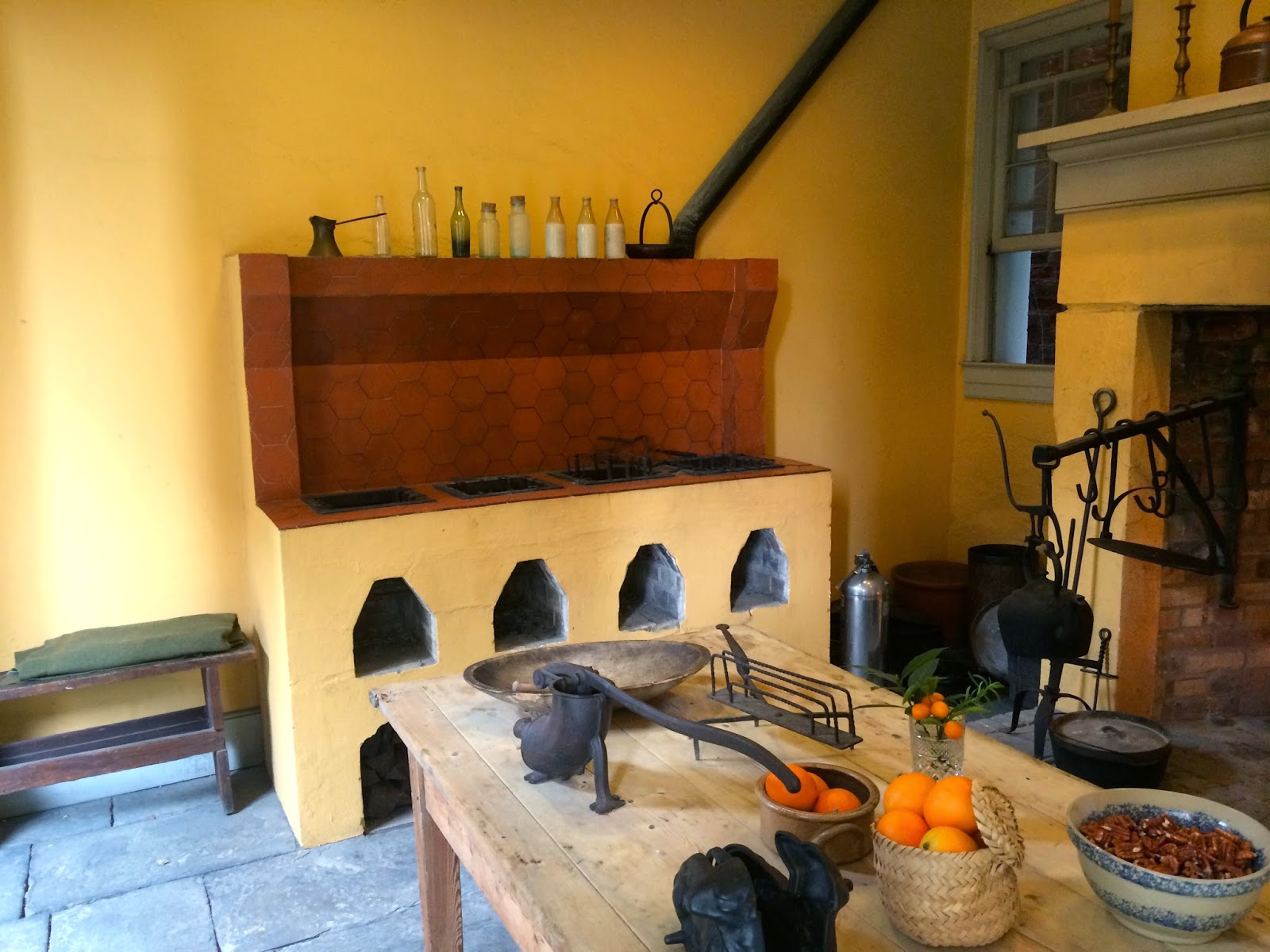 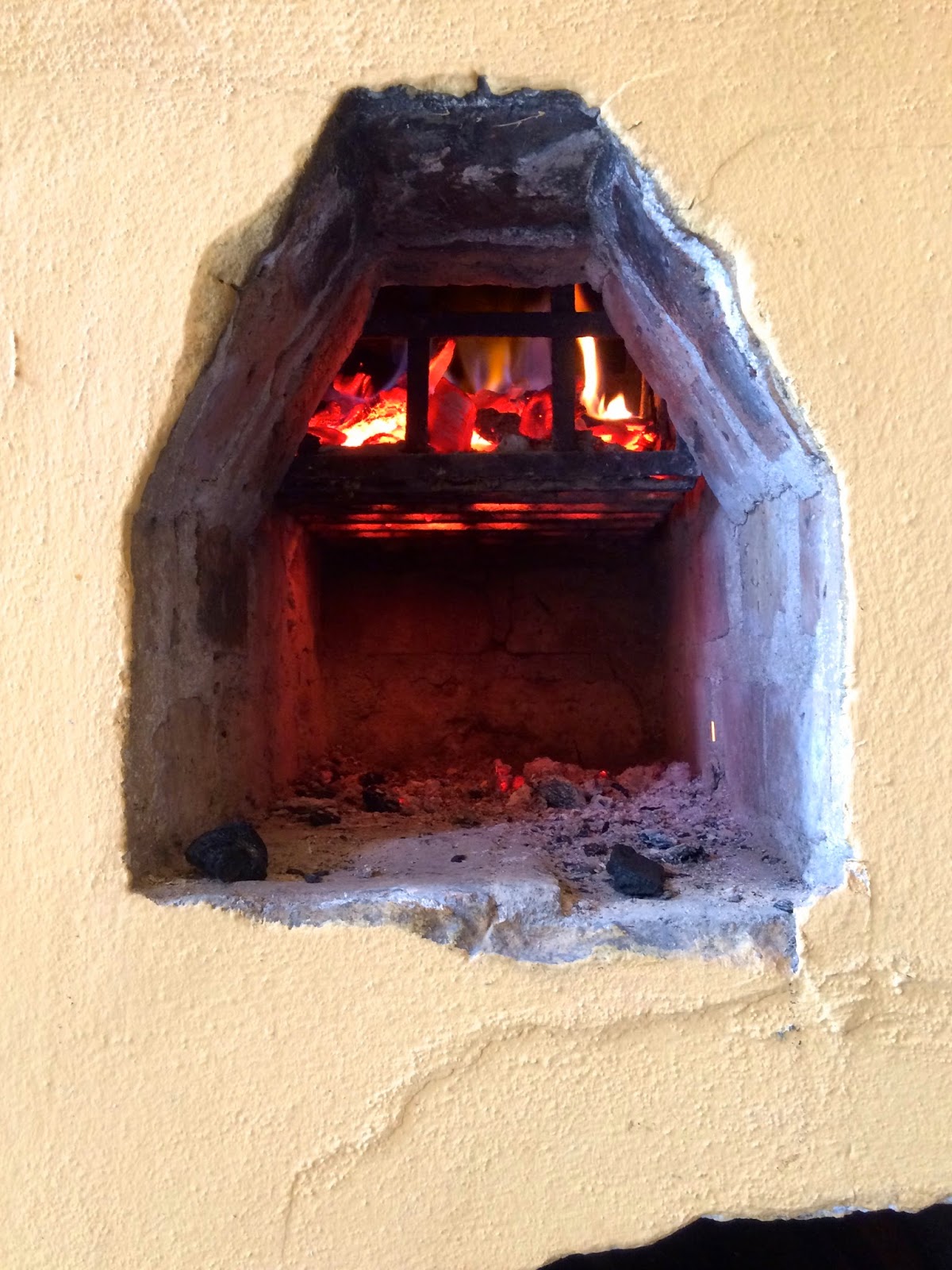 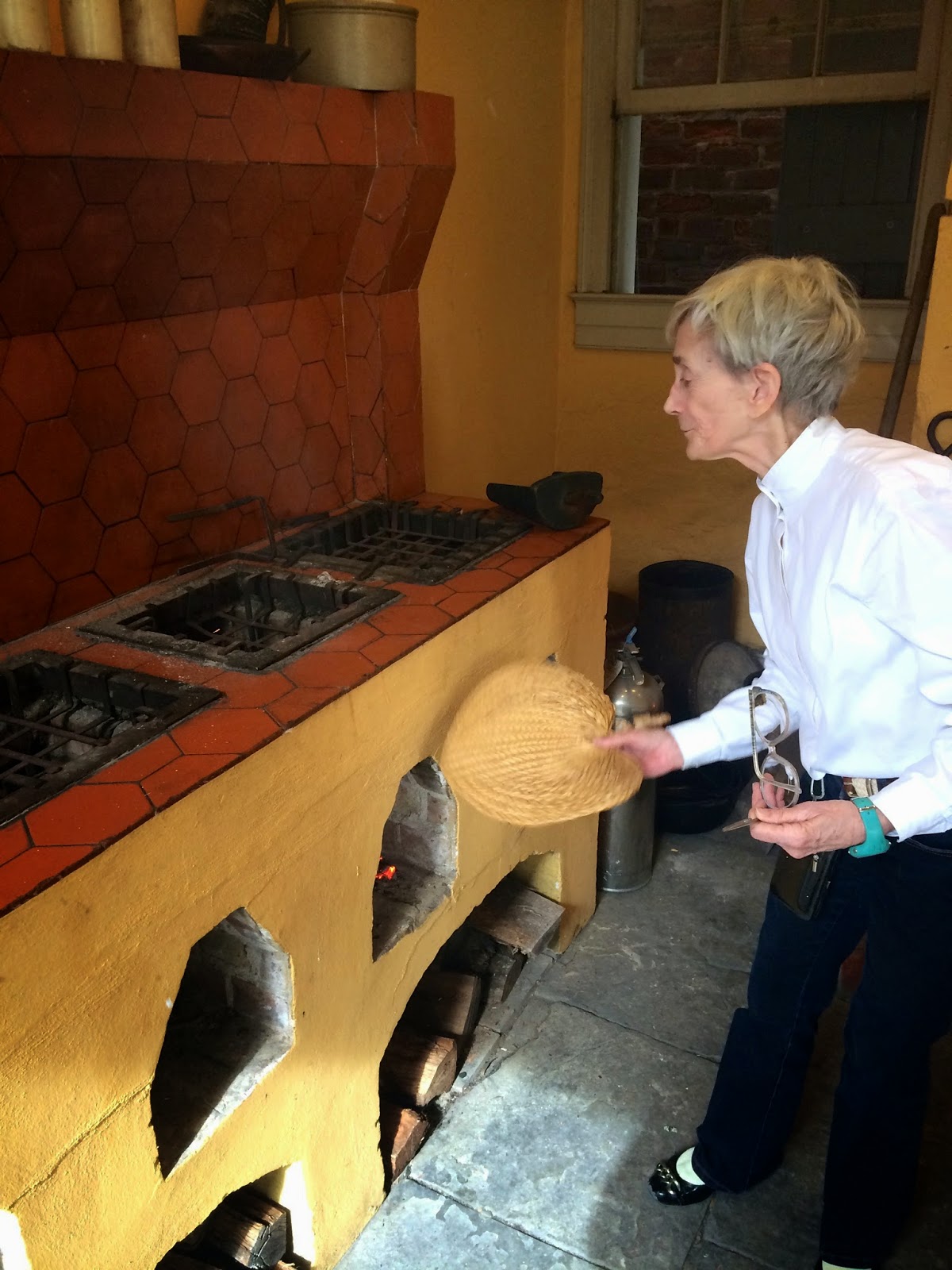 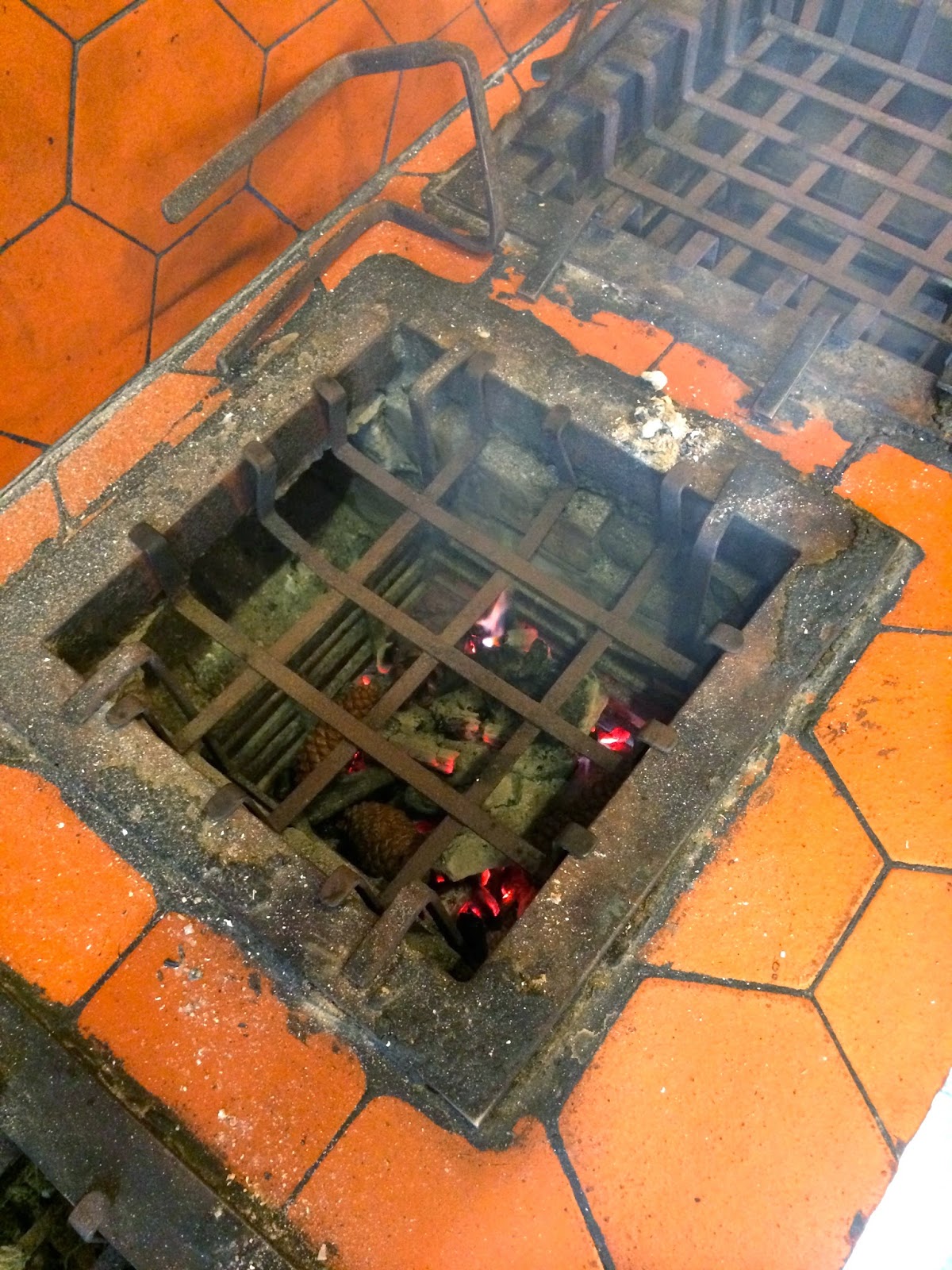 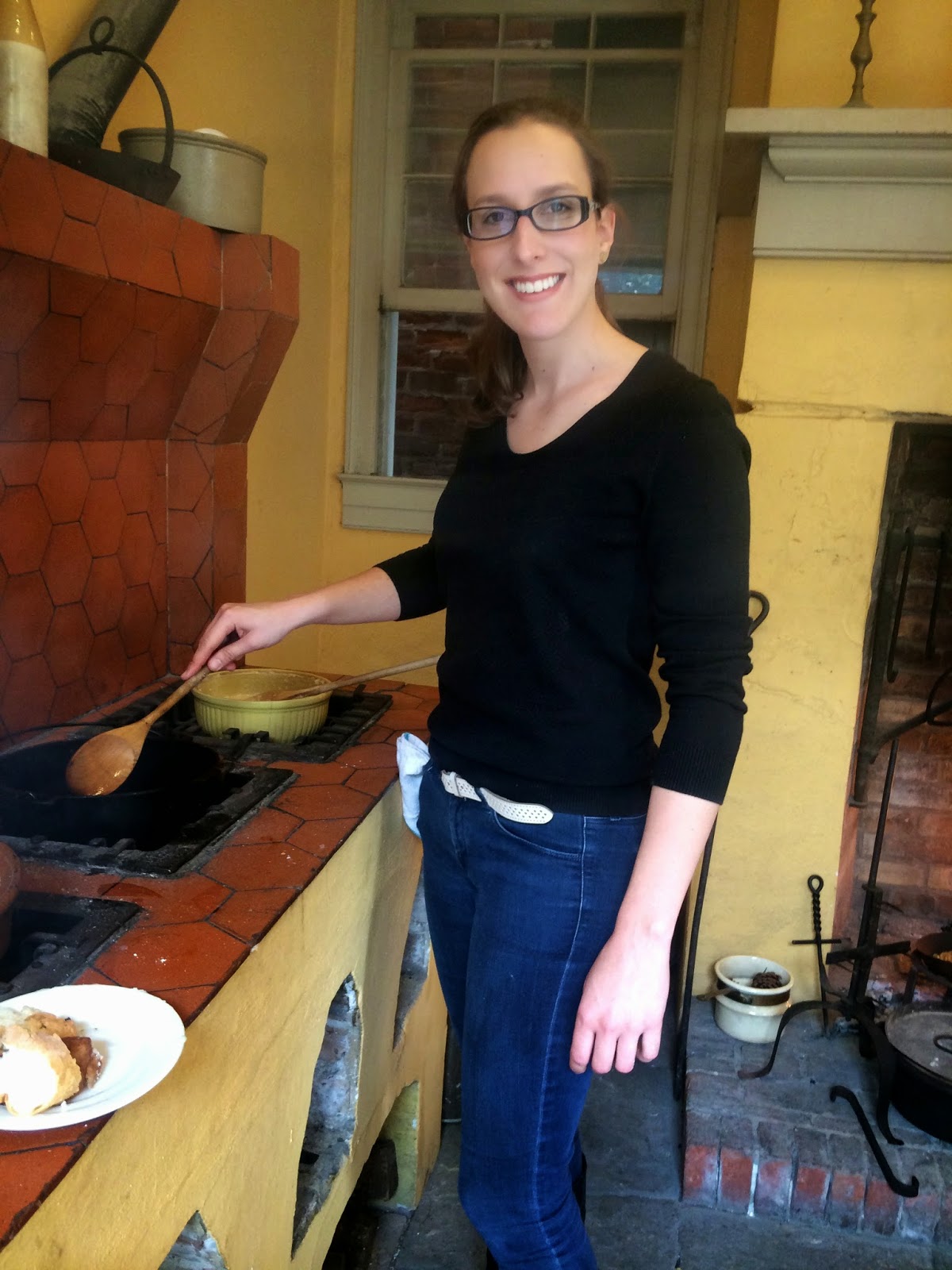 I cooked with Martha and Alece on Wednesday. Last week we met at Martha's house to plan out the menu (a feast!)
I was in charge of the calas and the gumbo z'herbes. I started off preparing the calas the night before. I took my sticky rice, added yeast, and let that rise over night. The next morning, I added the eggs, sugar, nutmeg, and cinnamon and let the batter sit while I prepared the potage, heated up my frying oil, and got ready for some fun! It took some experimenting to get the potage at the right heat to make the oil hot enough for frying. 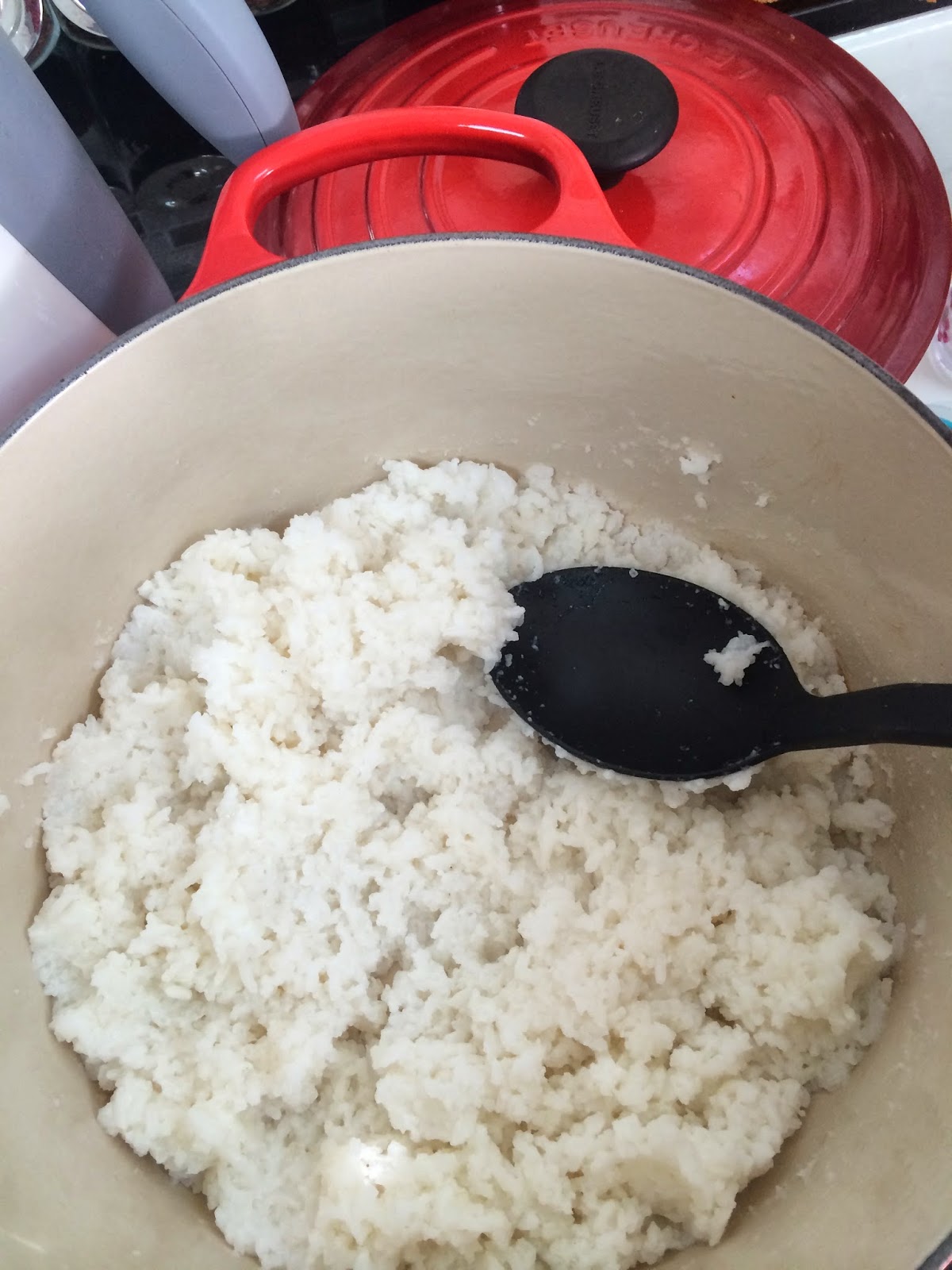 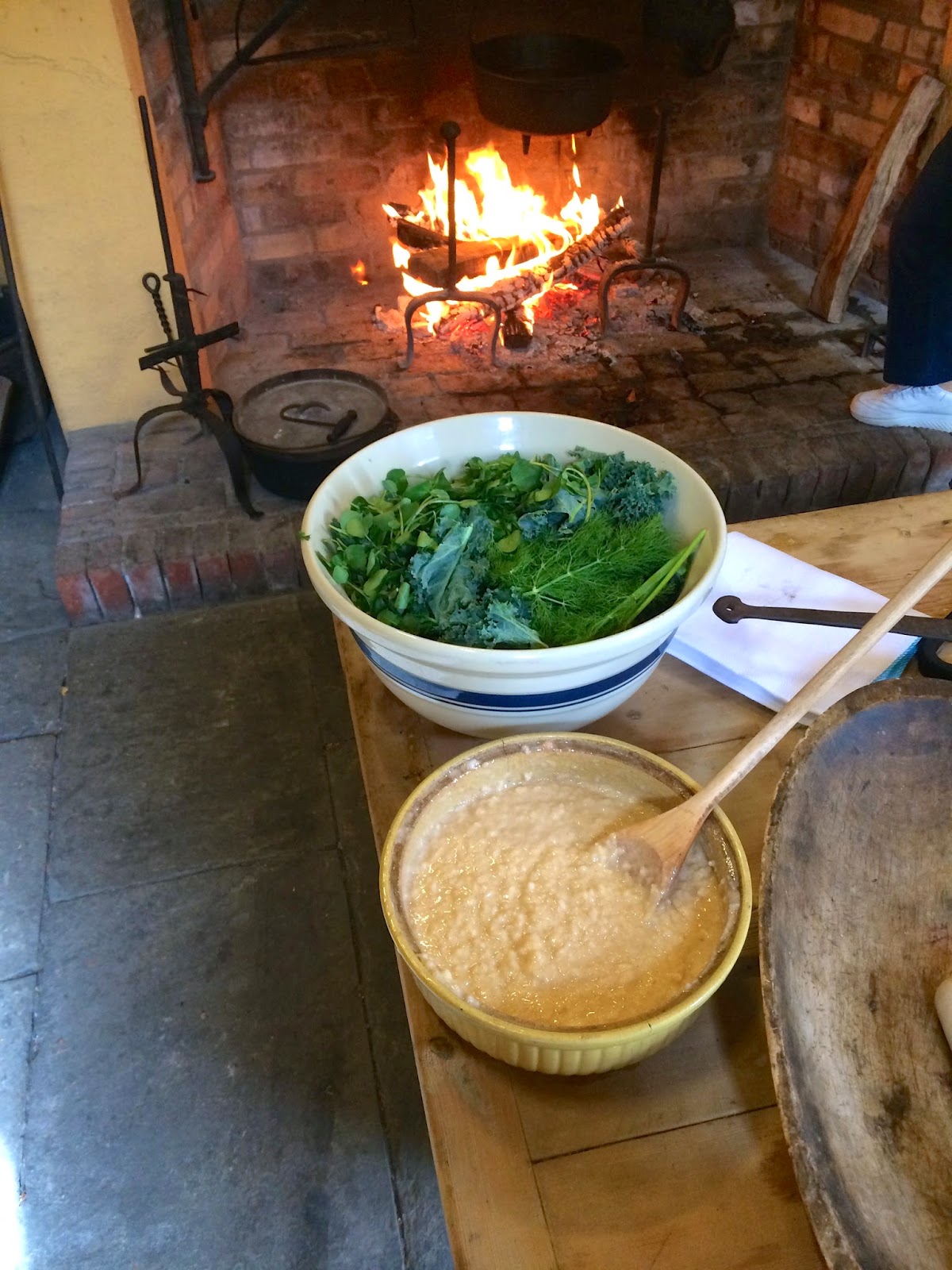 Eventually (right as some British tourists arrived) the oil was hot enough to spoon some batter for frying. The calas came out so well. Here is the recipe: 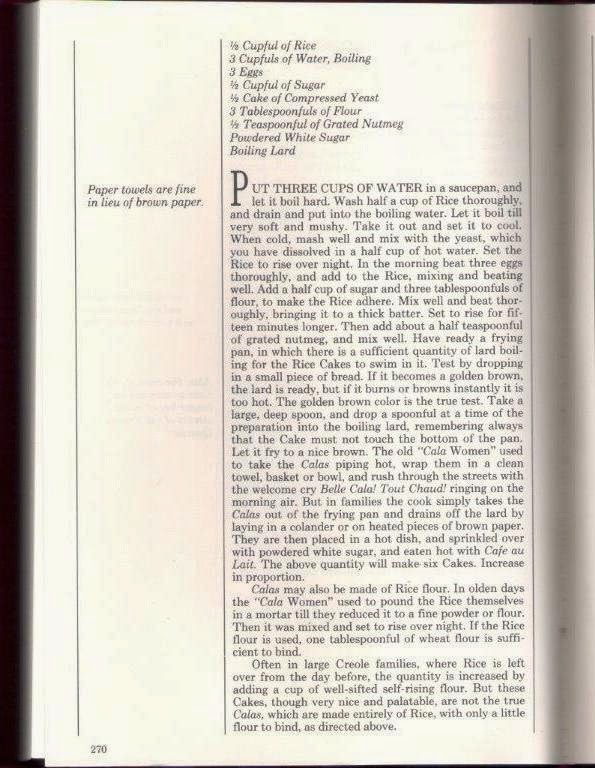 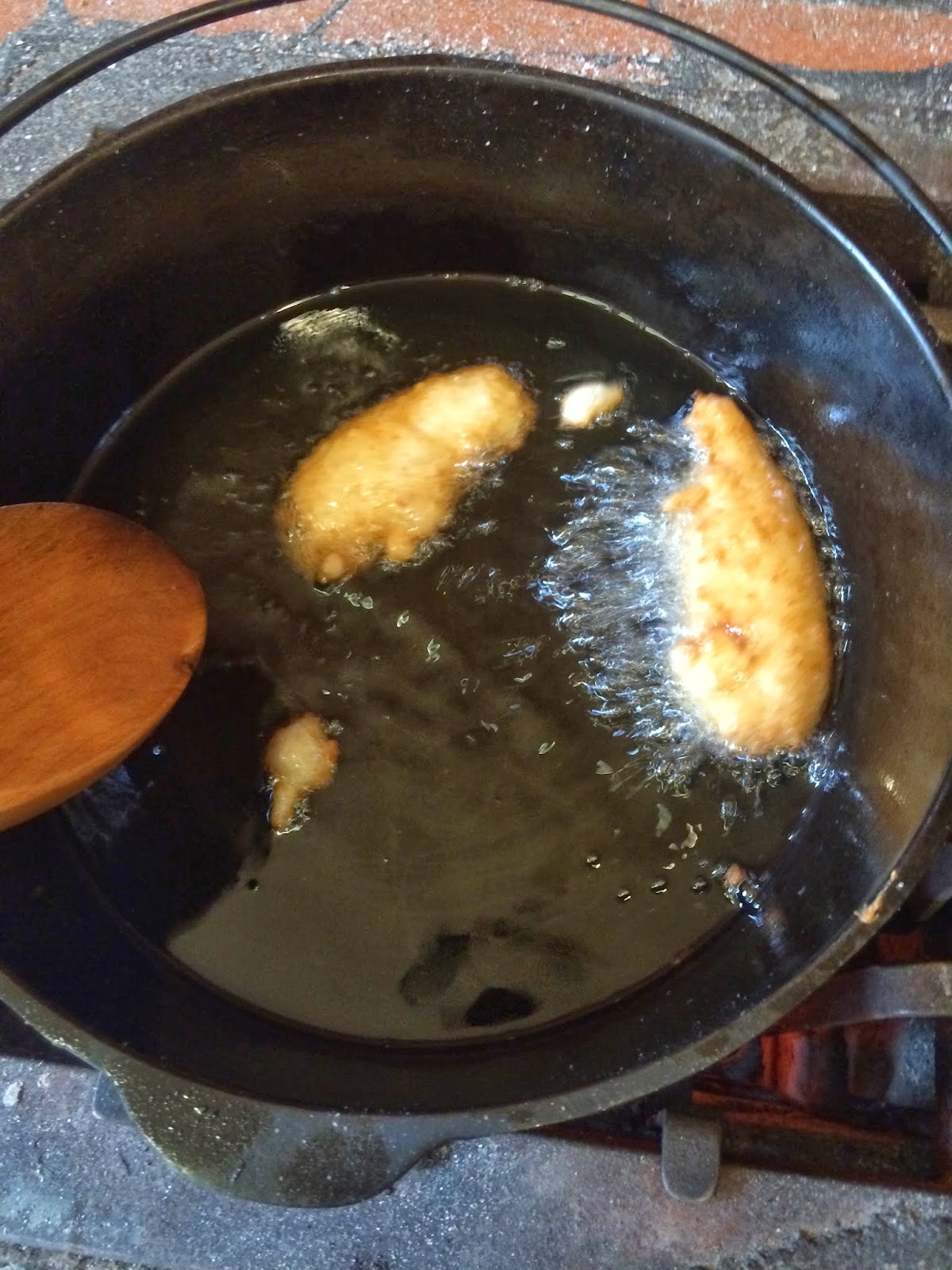 They were crispy on the outside and piping hot on the inside. I barely had time to put powdered sugar on them before we were scarfing them down for breakfast. I could have eaten 10 of them (I settled for two). Did I mention that I used an ENTIRE TUB of Crisco to fry them up. Yes, that happened. Meanwhile, Alece made French toast on the potage and Martha started toasting raw coffee beans on the hearth. 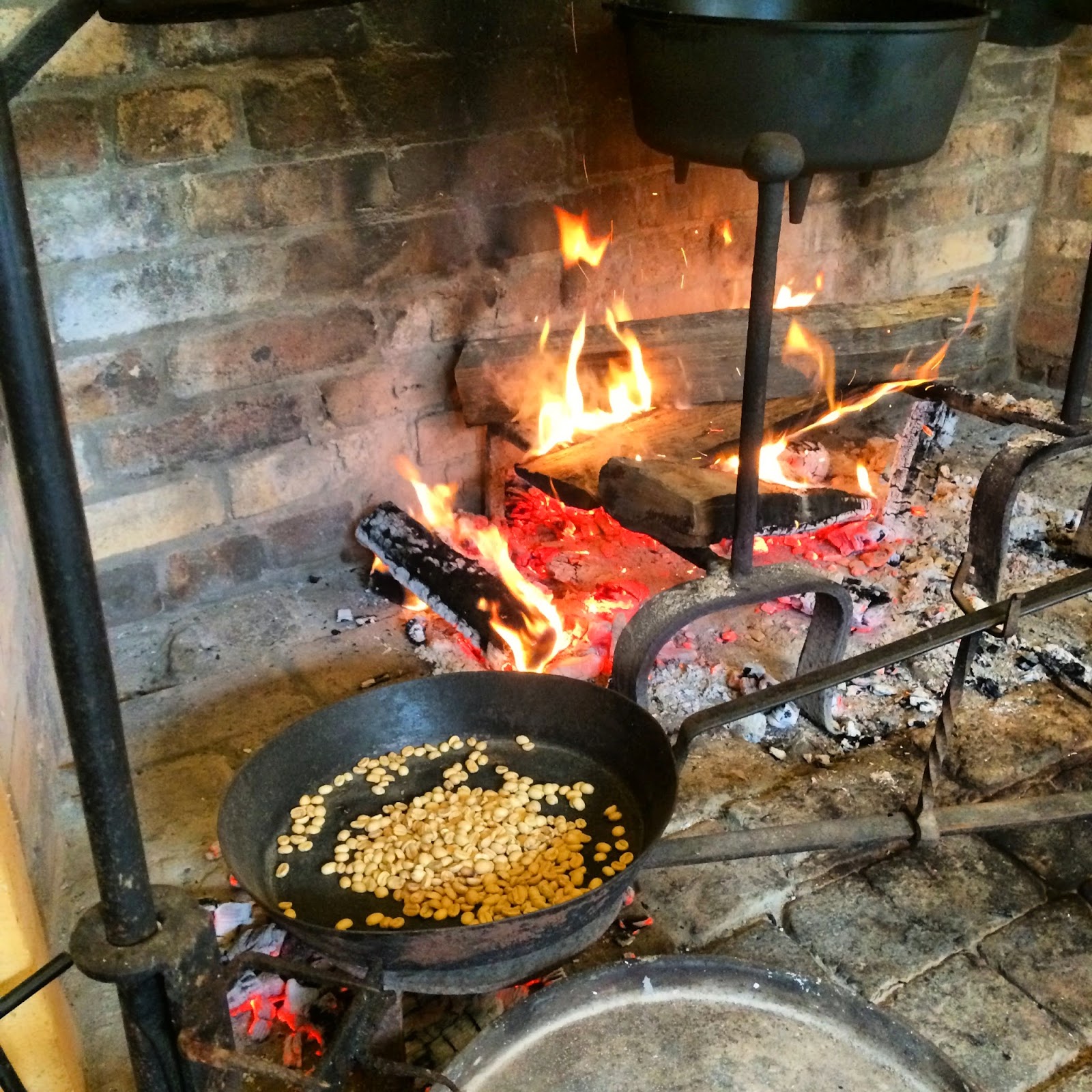 After I finished the calas, I started working on the gumbo z'herbes. One phrase: LABOR OF LOVE. Gumbo z'herbes traditionally calls for 7 types of greens. The most common greens are collard, turnip, radish, spinach, beet, and watercress. I also included fennel and some other greens (which I picked from the garden at Magnolia Mound). New Orleanians believe that the more greens you have in your gumbo z'herbes, the more friends you will make that year. Leah Chase's gumbo z'herbes served on Holy Thursday is probably the most well known iteration of the dish - very meaty.

Anyway, the recipe requires that you take half the greens and boil them over the open flame for 2 hours. While the greens are boiling, you de-stem and finely chop the remainder of the greens. My fingers were actually sore by the end of the day from all of the de-stemming I was doing! 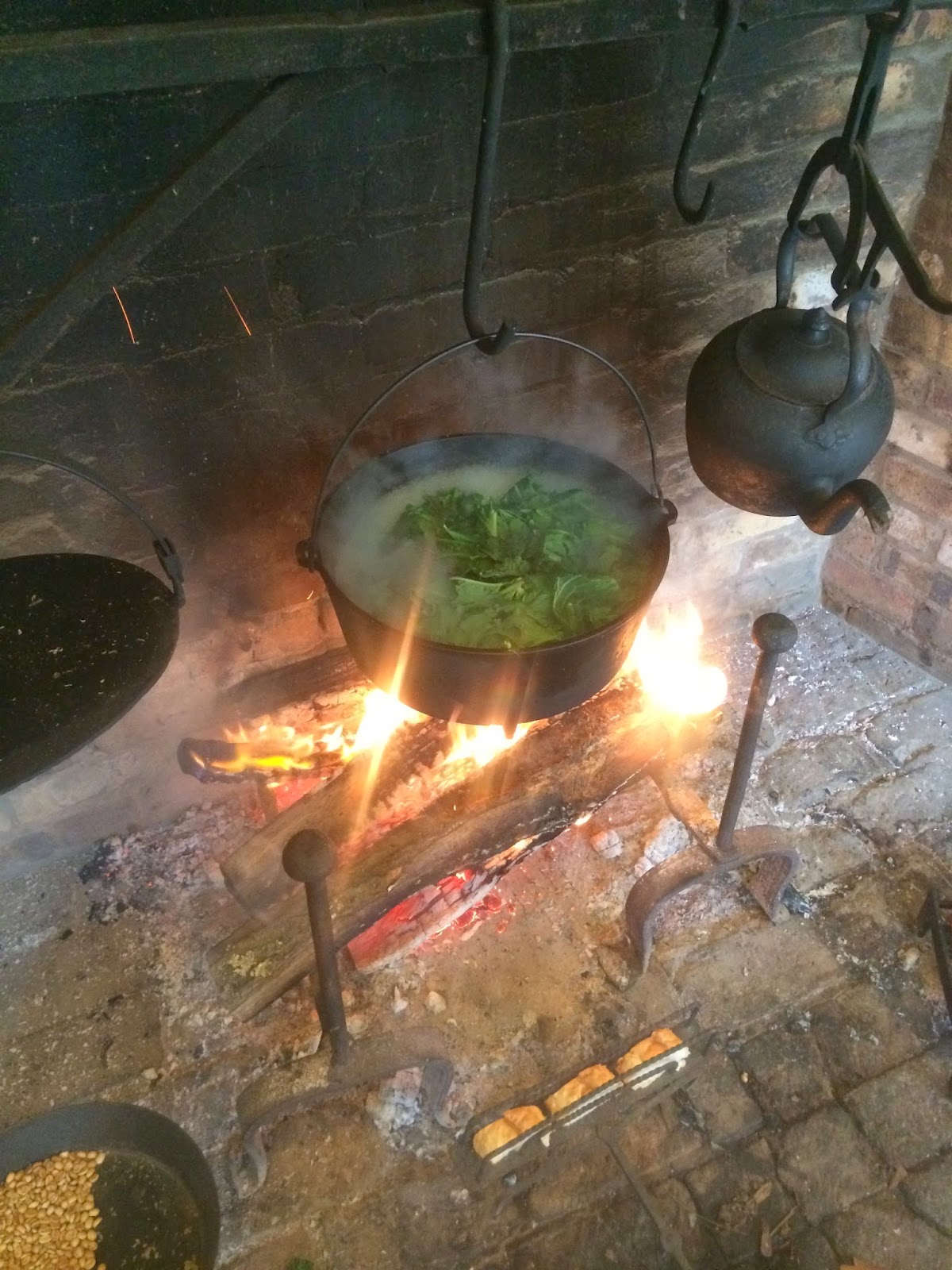 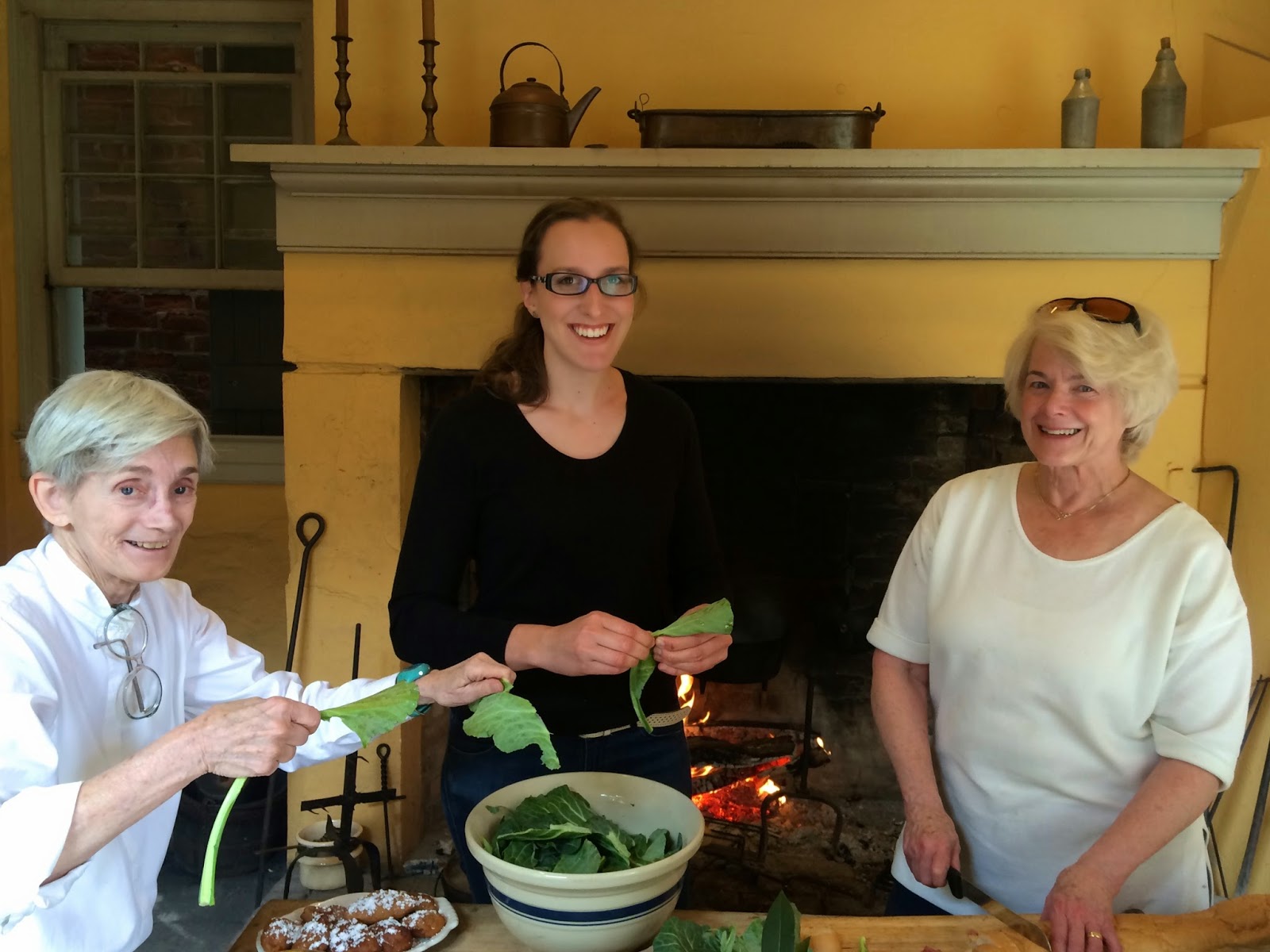 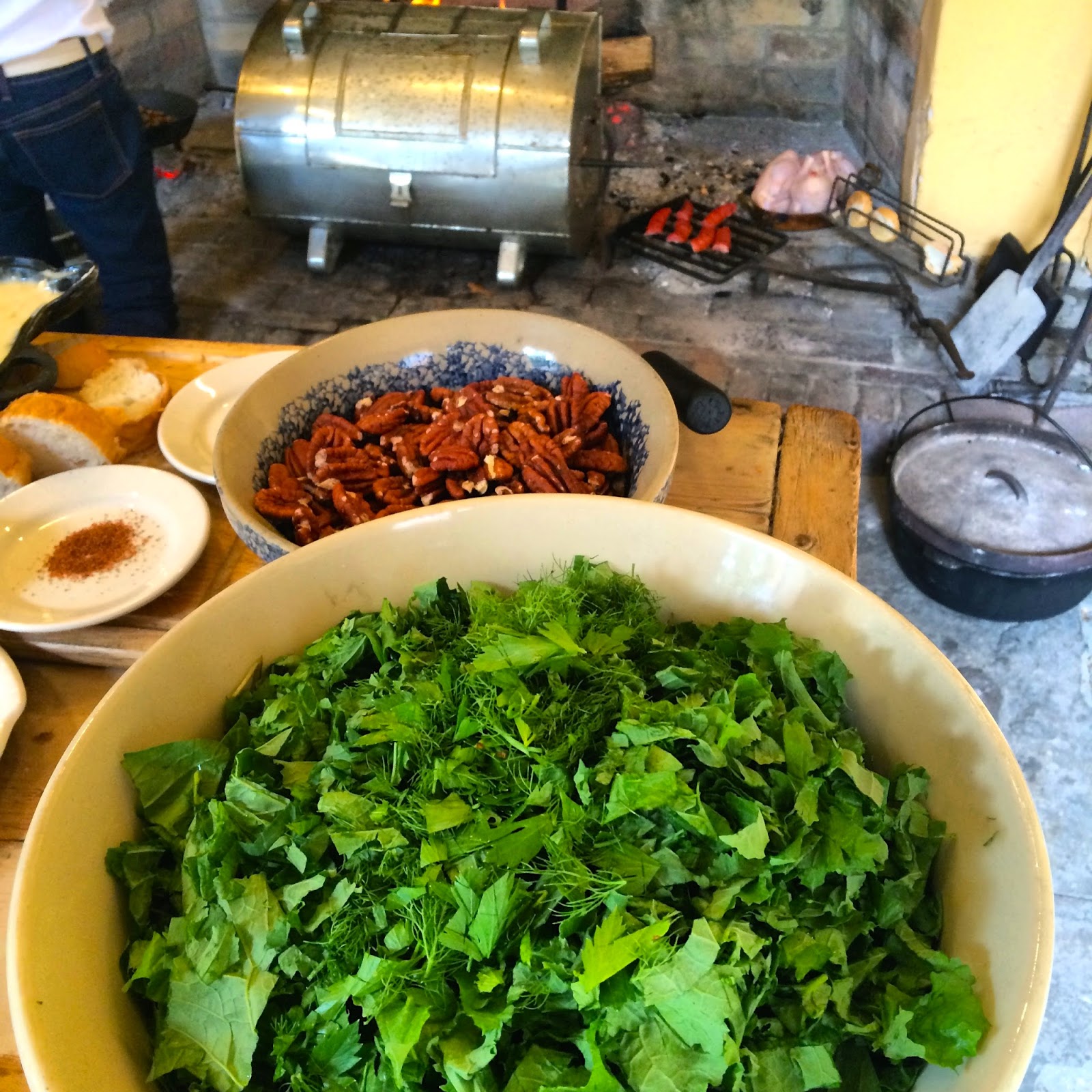 Once all of my chopping was done, I turned my attention back to the greens that were boiling away over the fire. After 2.5 hours, I drained the pot, reserving the broth for my gumbo z'herbes and discarding the boiled greens. Then, I started a roux on the potage -- eventually adding my green onion and sweet onions. 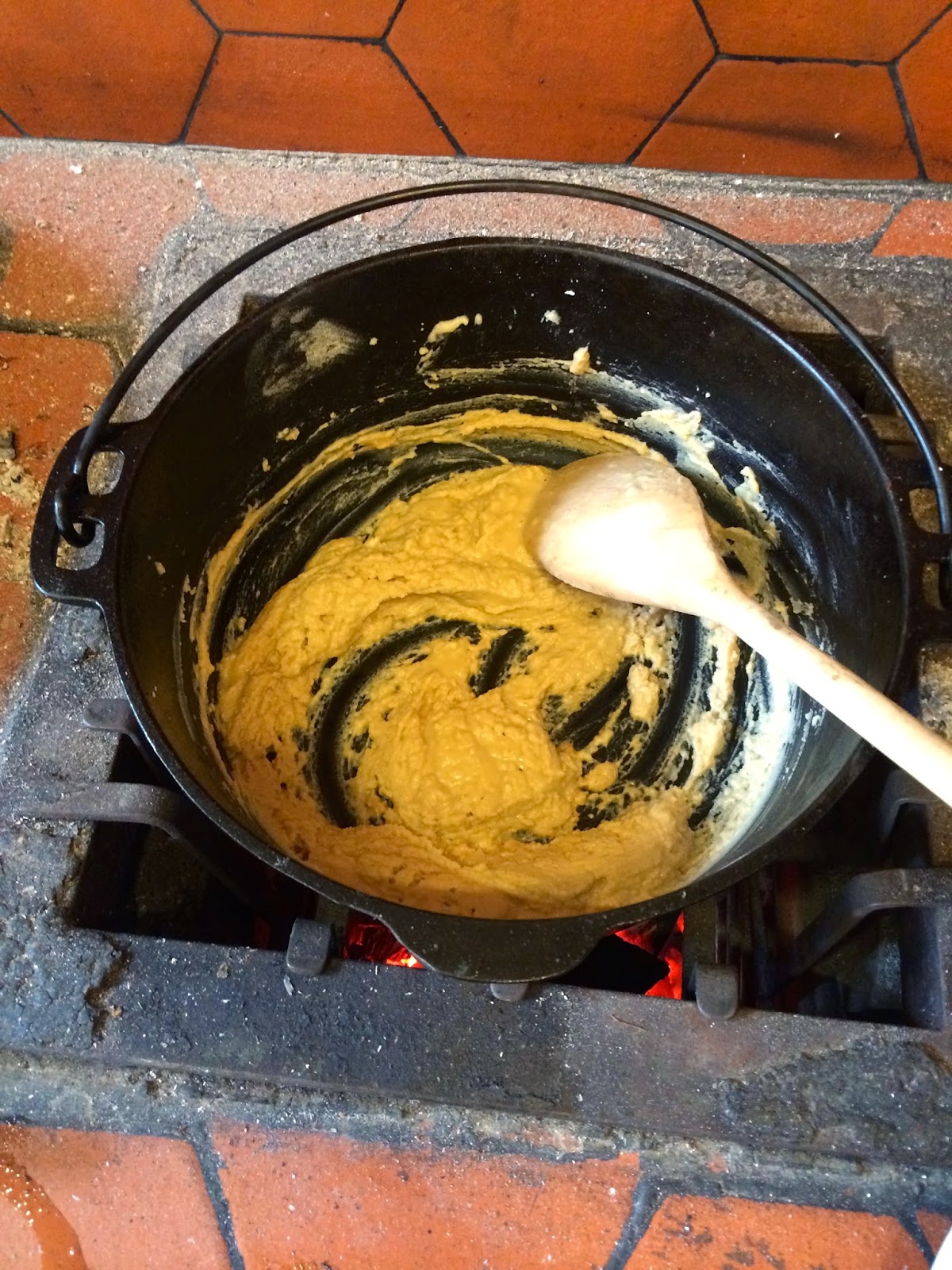 Then, I added my chopped greens to the roux/onions on the stove, sauteing for 15 minutes. After sauteing, I put the veggies back into the big soup pot over the flame and added the z'herbes broth back in along with ham hocks. Then, I let this gumbo z'herbes cook for an hour, adding in fresh oysters and their juices in the last 15 minutes. 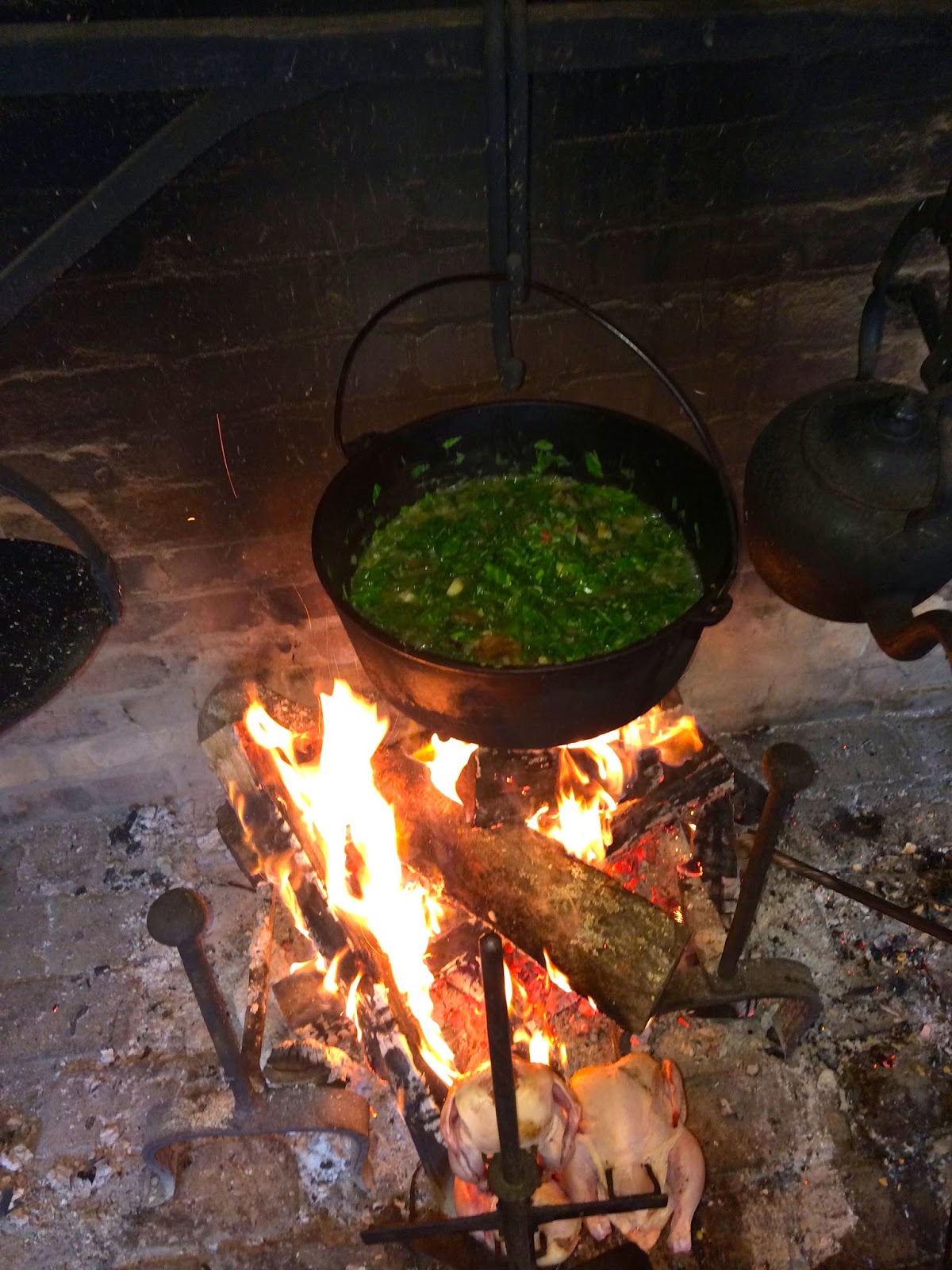 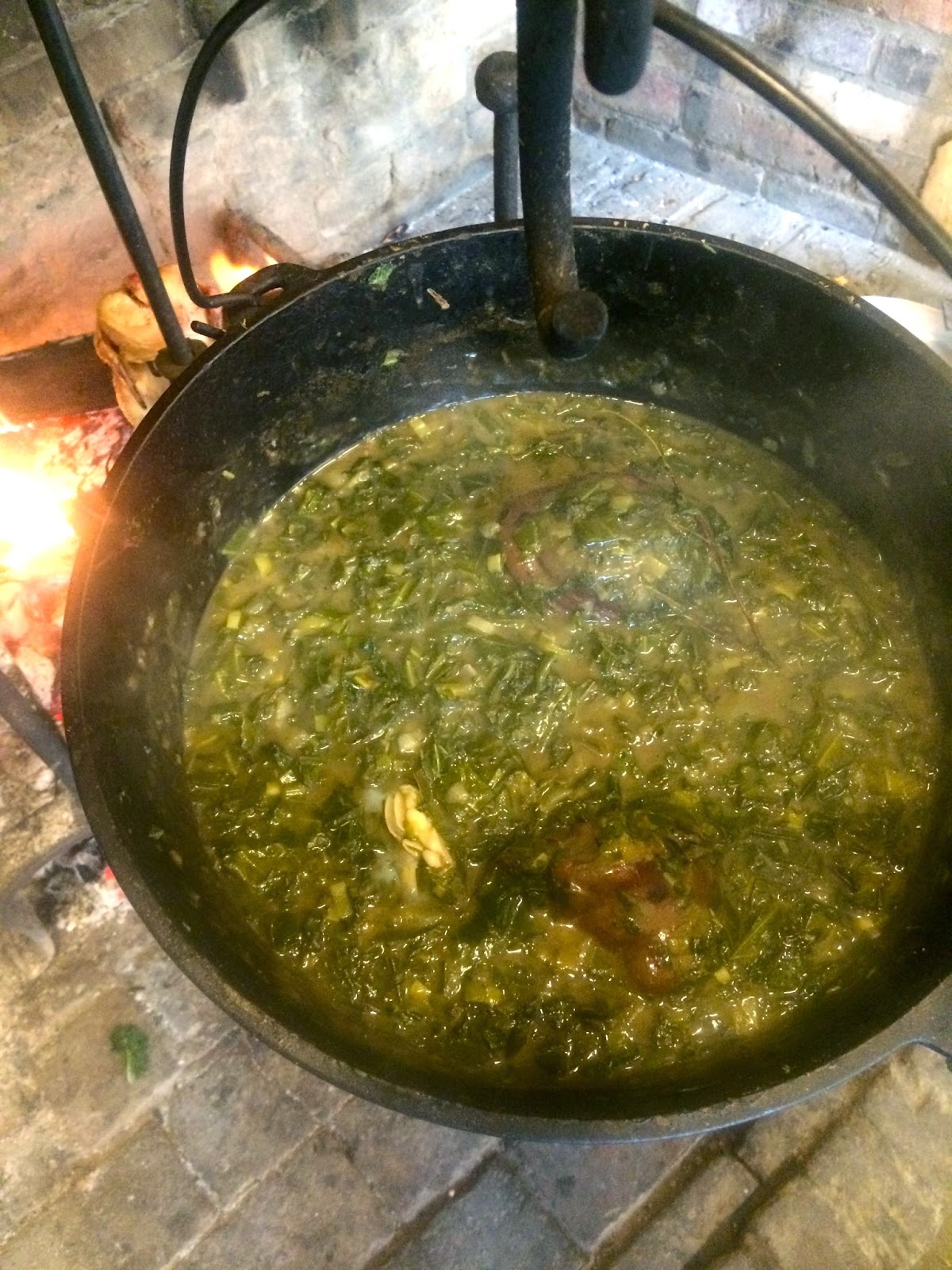 I have to admit, I was a bit nervous to try to the gumbo z'herbes. I imagined that my first spoonful would sort of taste like dandelion soup, or something similarly green. This gumbo, though, was something completely different. I think the roux, ham hocks, and oysters added a wonderful amount of body and complexity to this dish that made it absolutely delightful!!!

Here are a few more photos from the day: 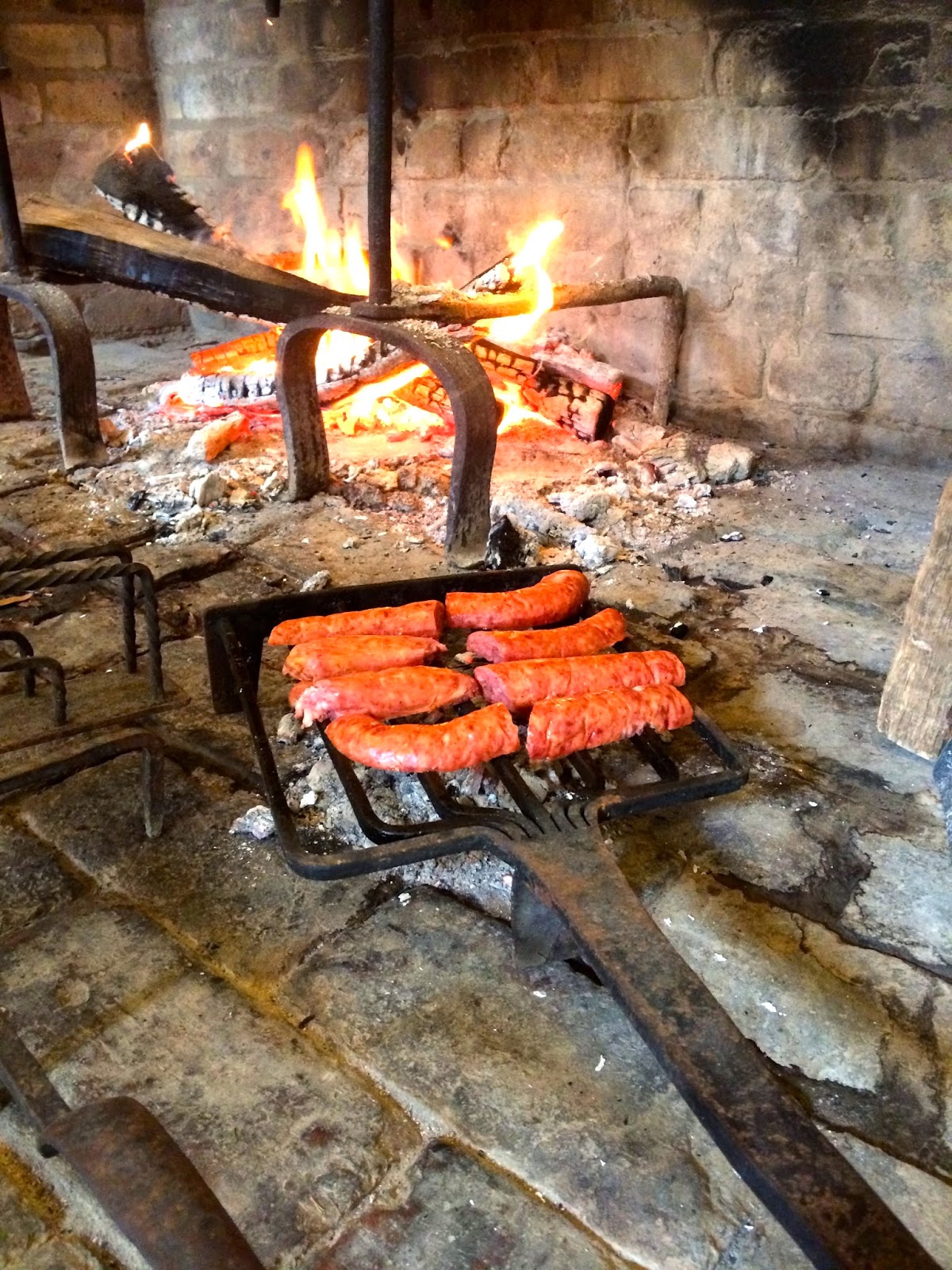 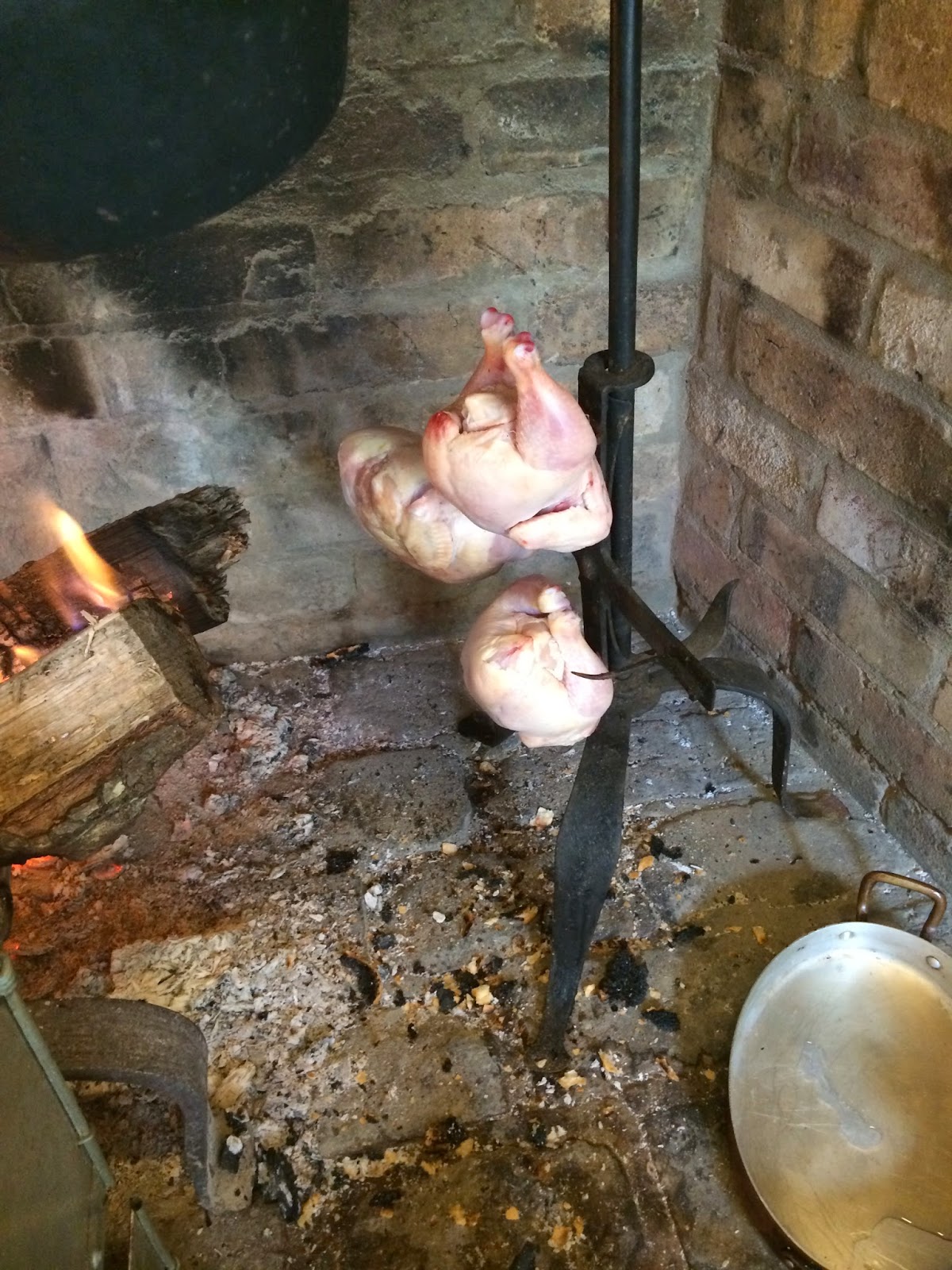 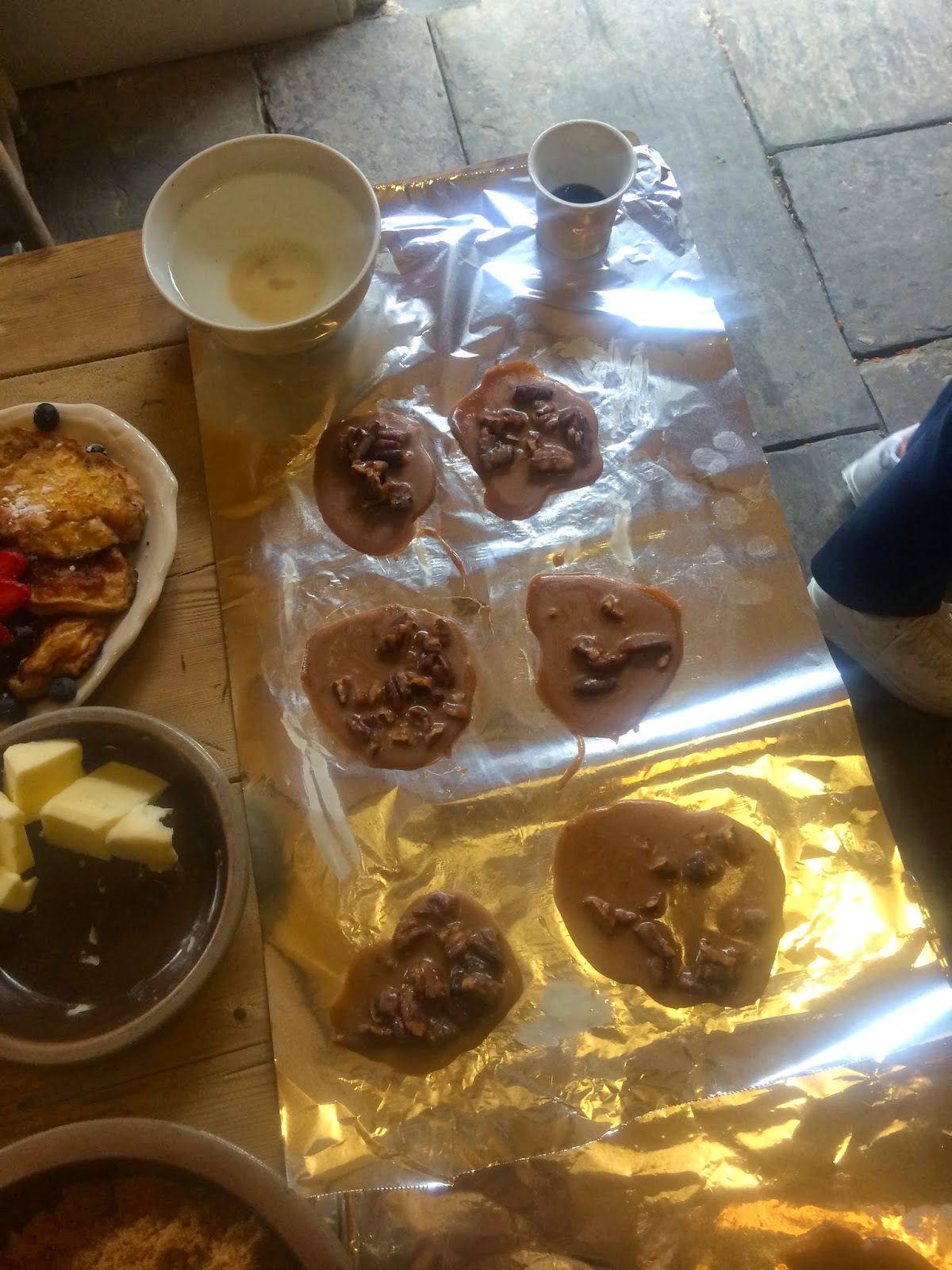 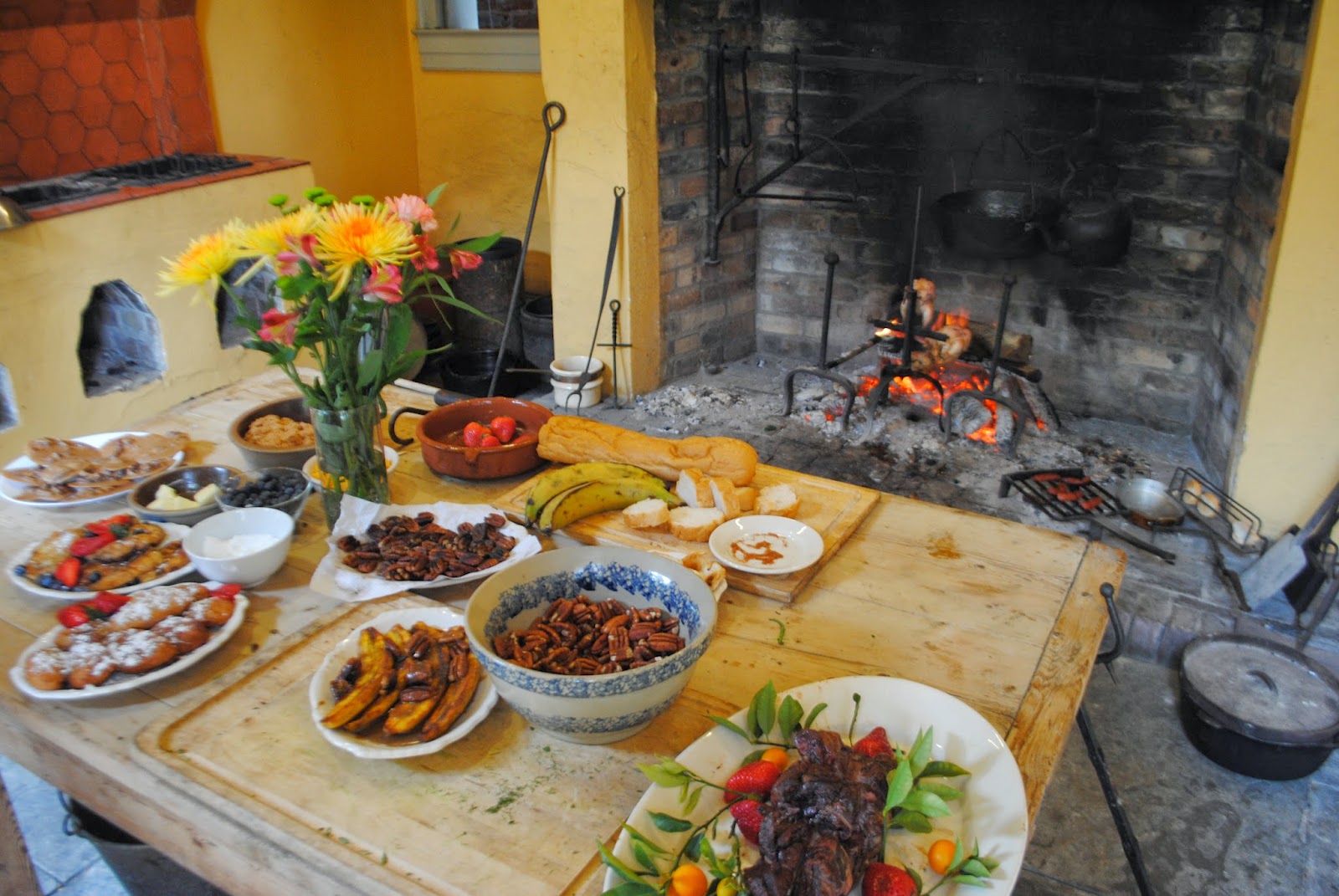 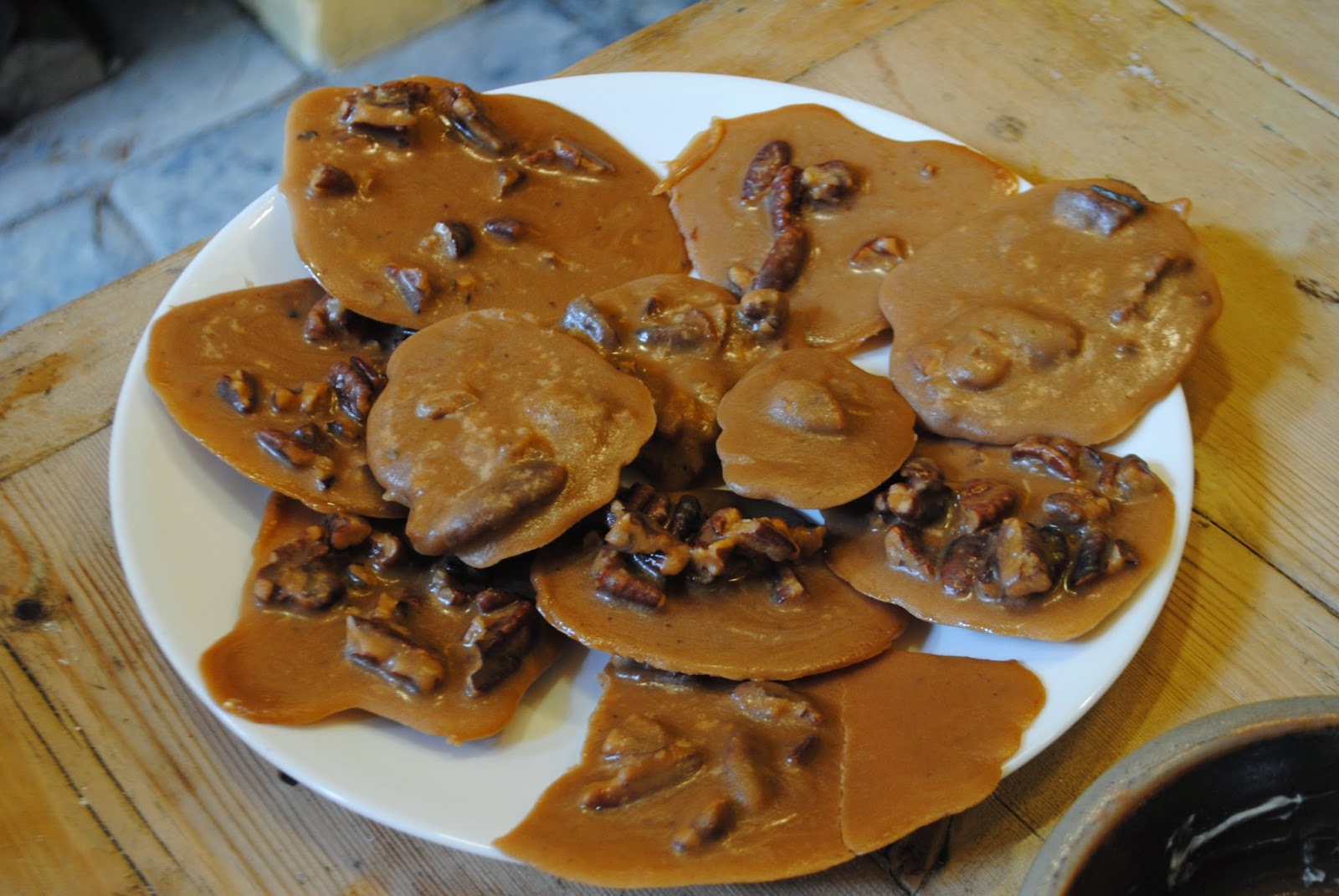 Posted by Ashley's Adventures at 20:19