I am so glad I took this side trip to Sicily. I went by myself during the last week of my program in Rome. I tried to convince some of my colleagues to join me, but they were wrapped up in finishing projects for the GustoLab, so I ventured off on my own. I hadn't stayed in a hostel by myself in years (I think the last time I was in one was in Australia). So, I was feeling a bit adventurous as I set off for the city of Palermo.

Within moments of arriving at the hostel, I met Jess -- a 25 year old doctor from Australia who decided to take a 5-week holiday to explore Europe. She was actually one of the most well traveled people I had ever met. Anyway, we decided to head off to some of Palermo's more famous food markets straight off the bat. She had already spent a few days in the city and knew of some great food places to check out. On our way to the Capo and Ballaro markets, we stopped to try some of Palermo's more famous street foods/dishes. One of the coolest things about Sicily's food culture is the long history of Arab influence on the island's cooking traditions. These influences are most directly tied to the fact that the island was under Arab rule from 827-1091 as the Emirate of Sicily. The timballo di anelletti alla palermitano, for example, is a baked pasta dish that uses a pasta that is shaped like American Spaghetti O's. Food historians trace this dish's origins back to the 9th century, claiming that it was introduced by Arab emirs. Originally, the dish was served with pasta, meat, and vegetables and was cooked into a semi-solid forms so that it could easily be transported. Today, you can find this dish at most roadside food places (served in one of those metal to-go pans). Another famous street food is Palermo's pane con panelle - deep fried chickpea fritters served piping hot on a sesame seed bun. When you bite into this dish, you feel as though you are only eating carbs - no condiments or greens. Just chickpeas and bread. It's nice and salty! 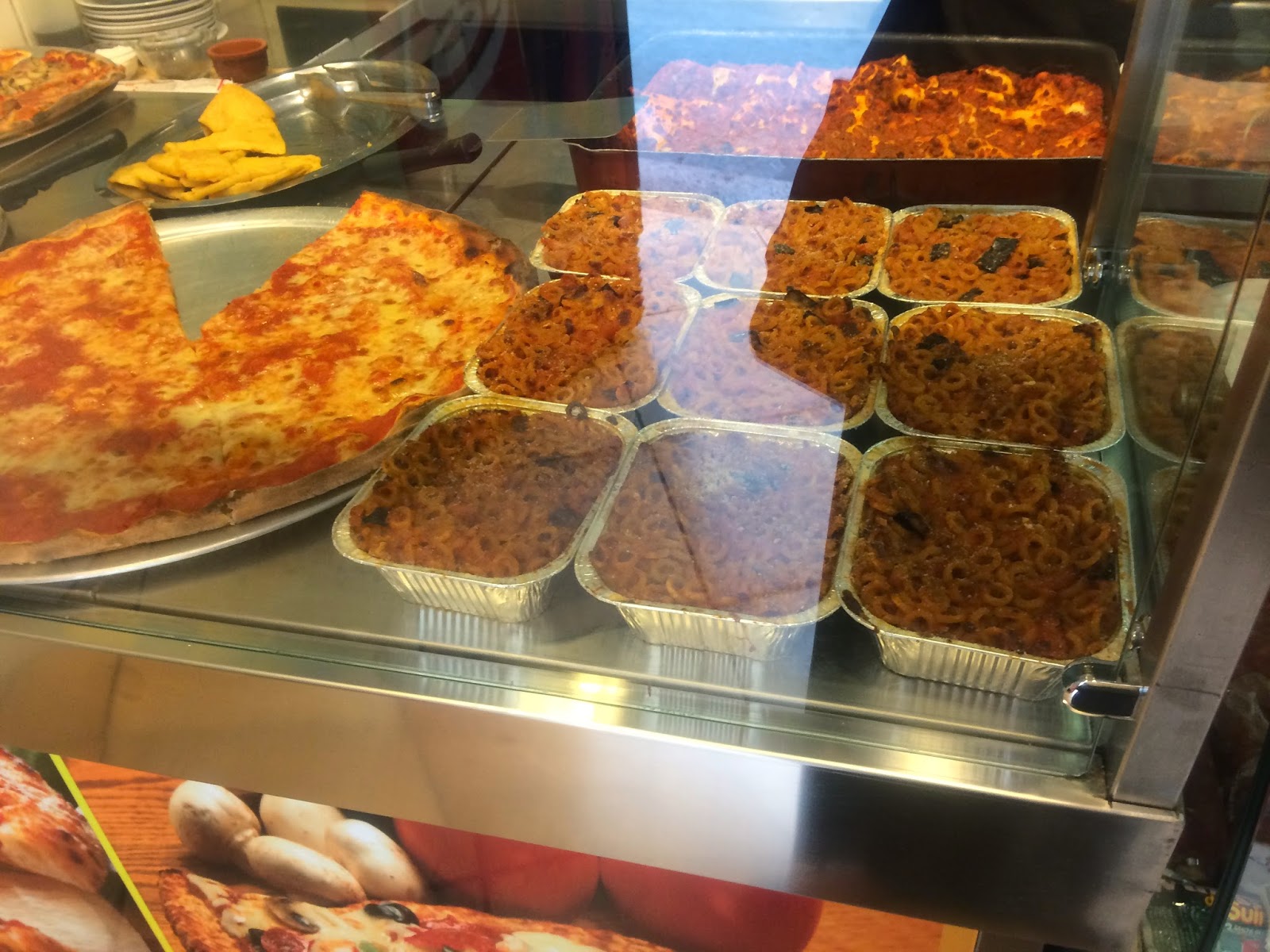 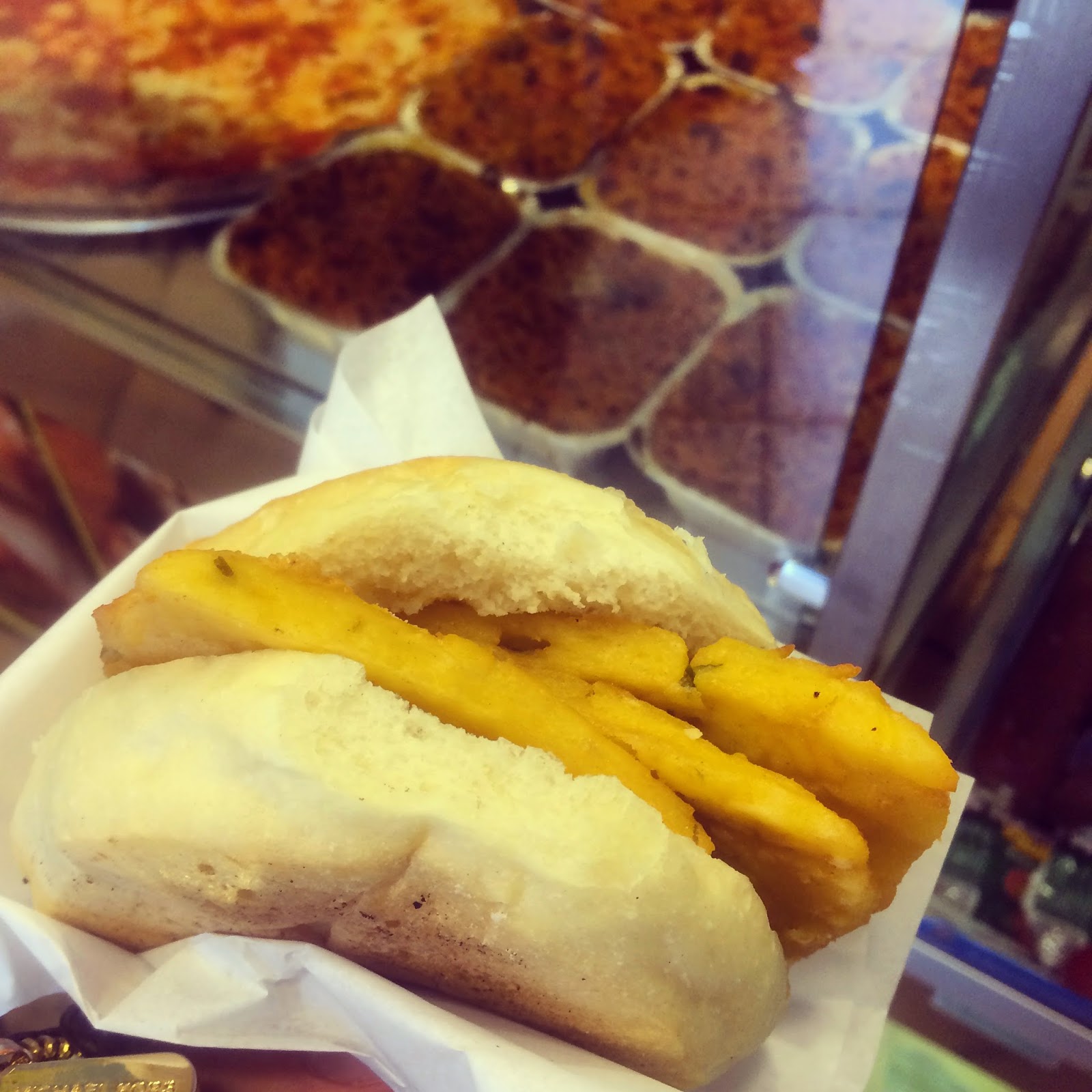 Eventually, we made our way through the Capo market -- the largest and most sprawling of the city's open air markets. Similar to the street foods above, this market (along with the other markets in Palermo) is a remnant of Arab rule in the city and has run almost continuous in the same spot since the 9th century. In many ways, the markets in Sicily reminded me of those in Fez -- laden with fresh, local produce as well as all manner of tapestries, clothing, spices, trinkets etc. The market is divided up into sections that weave along the narrow alleyways.

One of my favorite types of local produce was the 5-ft long cucuzze (a type of bright green zucchini). I was also a fan of the local blackberries, which were served in a paper cone. They were really sweet and stained my finger tips bright purple for several days after eating them. 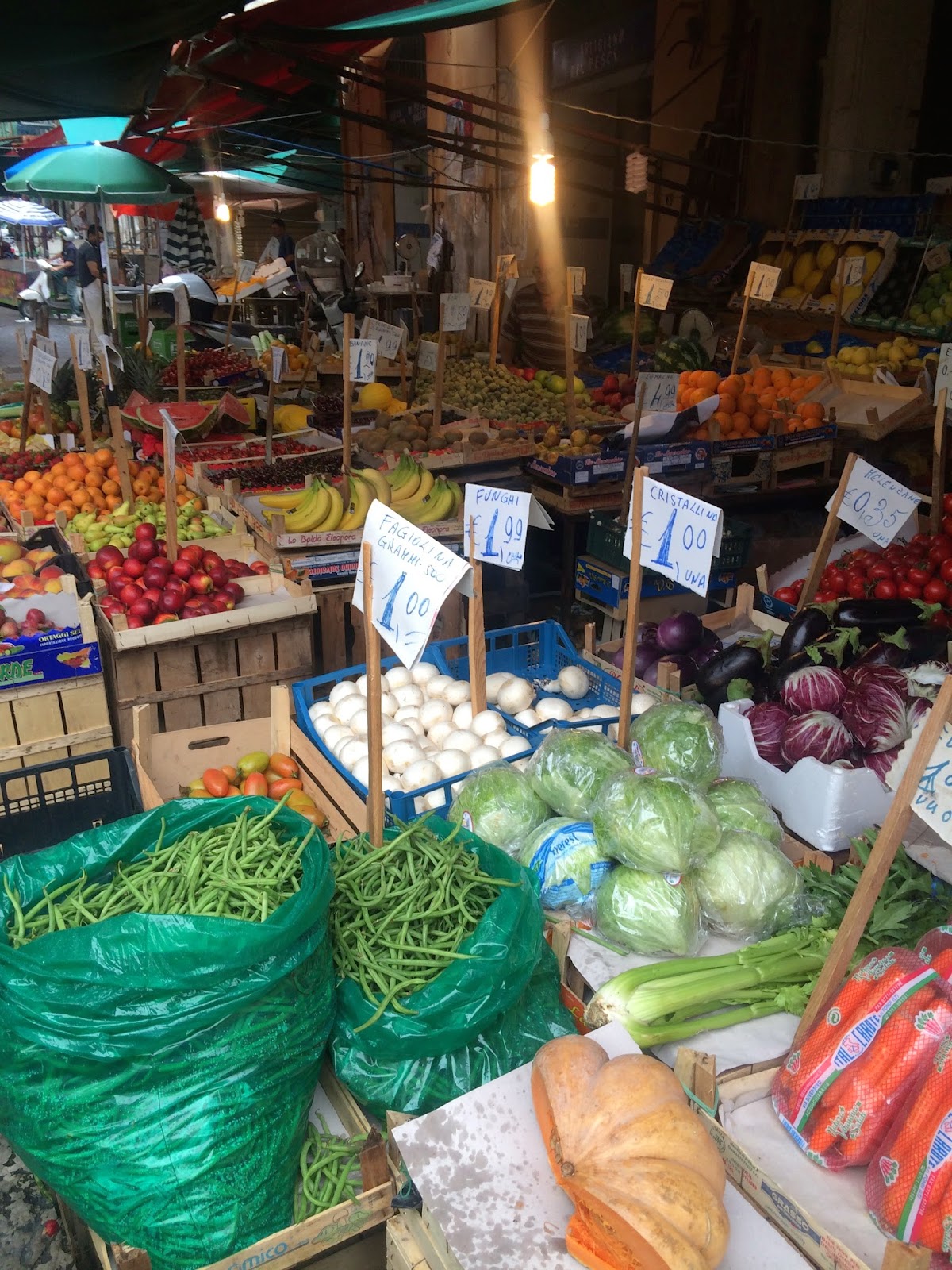 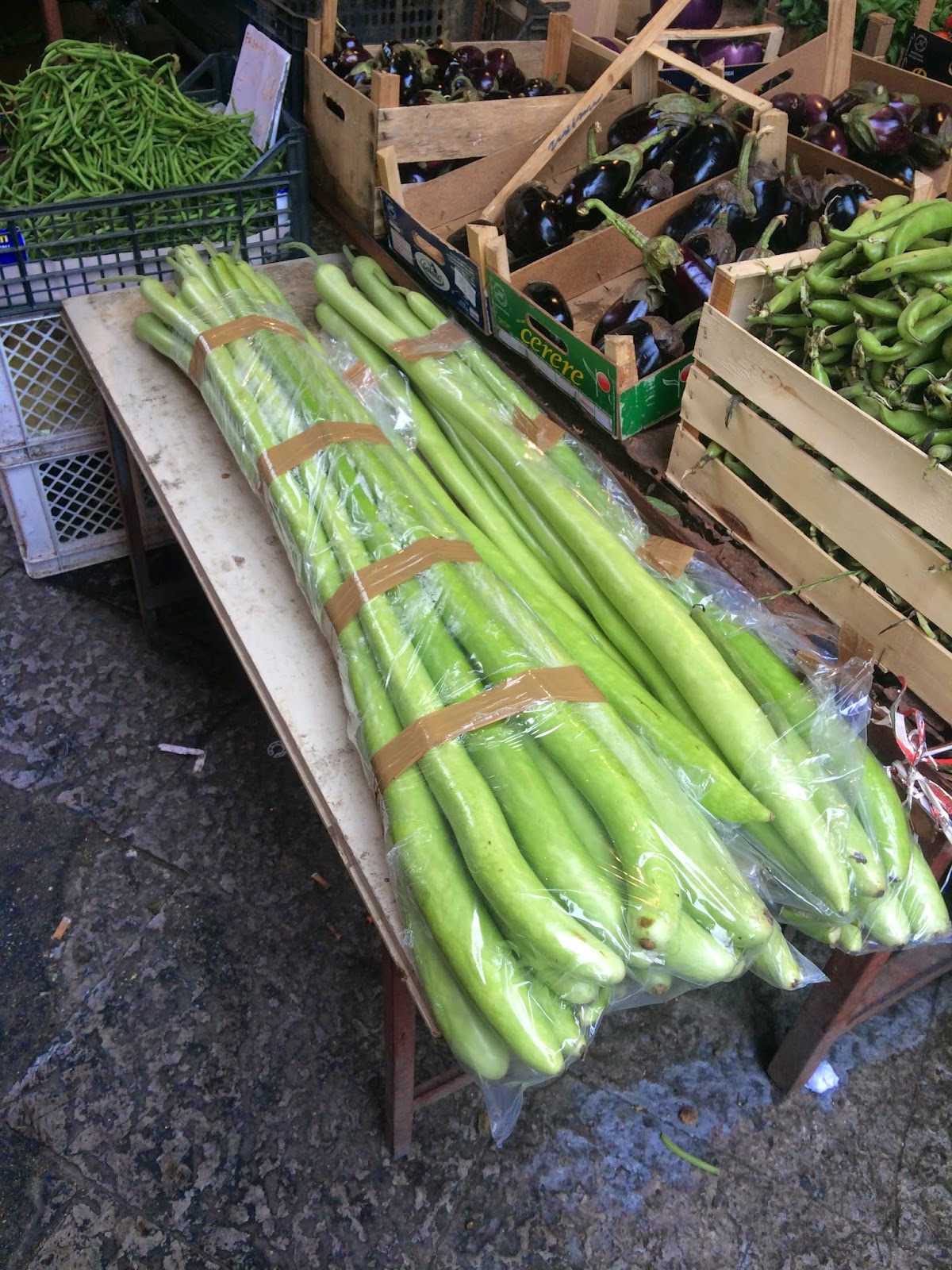 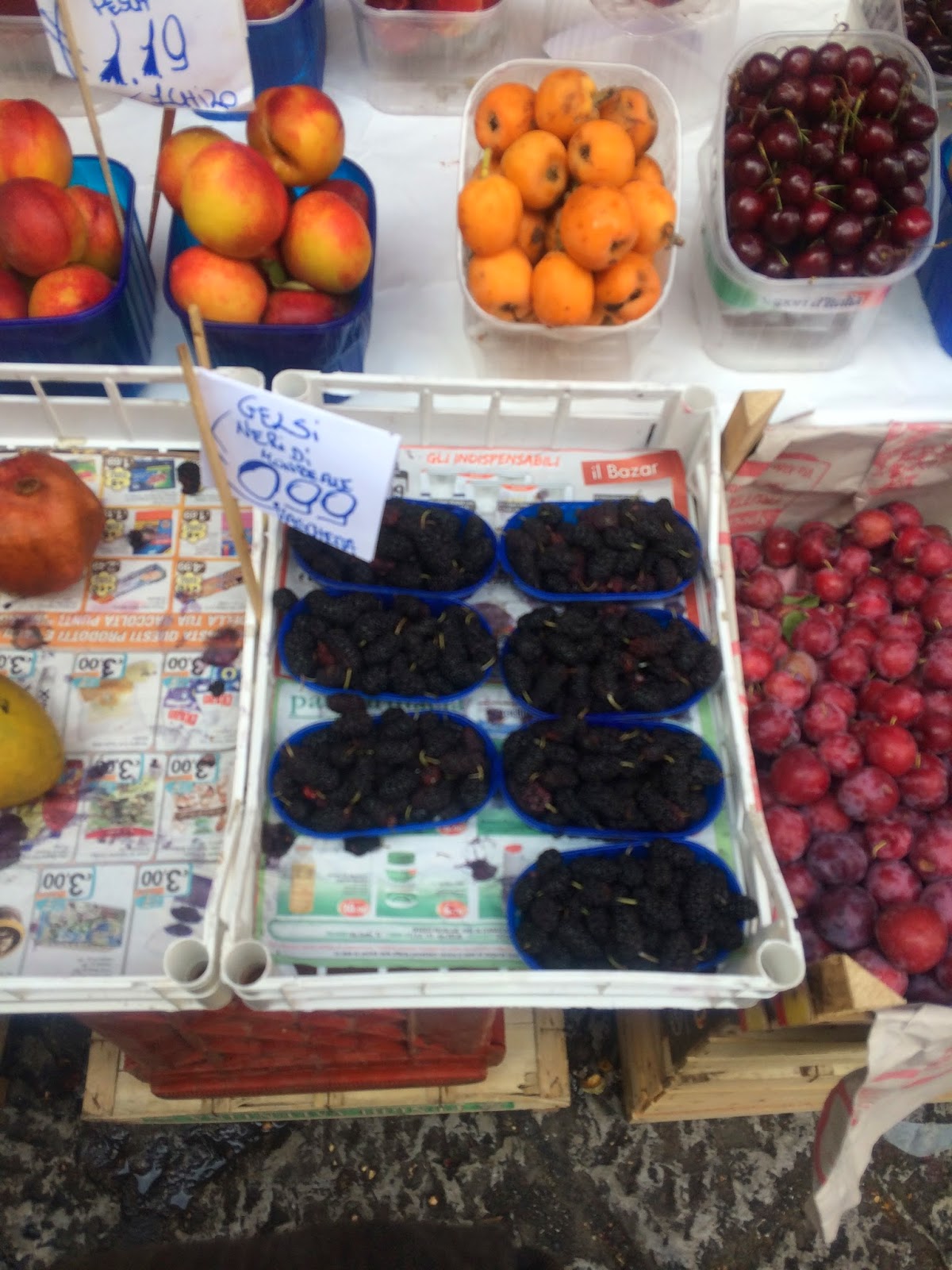 After weaving our way through the Capo market, we stopped by a street food stand selling Sicilian pizza. I was excited to come across this vendor because he came highly recommended by the locals (in fact, several people raved about him as they were munching on his pizza right there in the middle of the street). His pizza crust was super spongy and soft with just the lighted smathering of tomato sauce and a sprinkle of dried Sicilian oregano. And the pizza slices are HUGE! 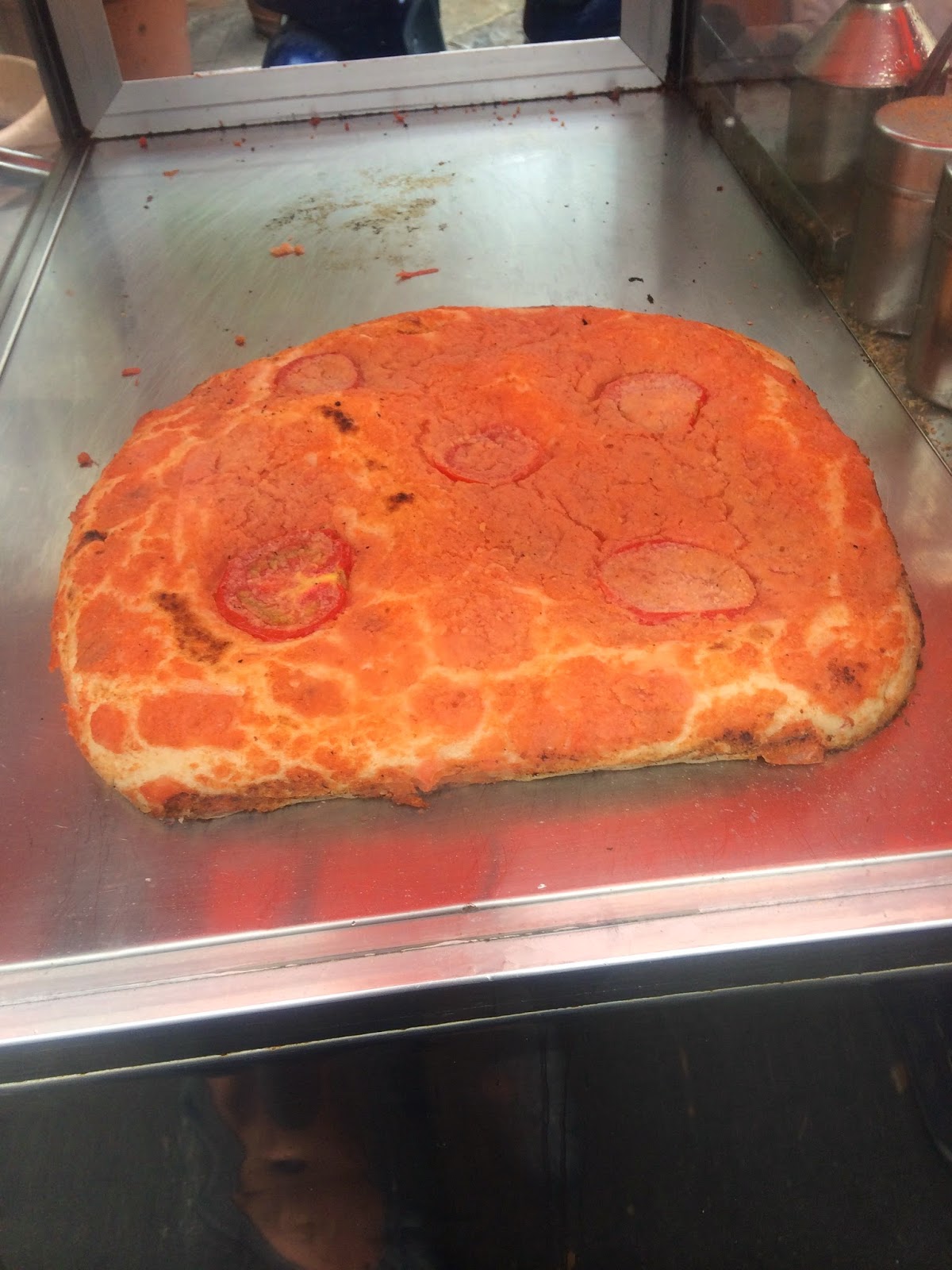 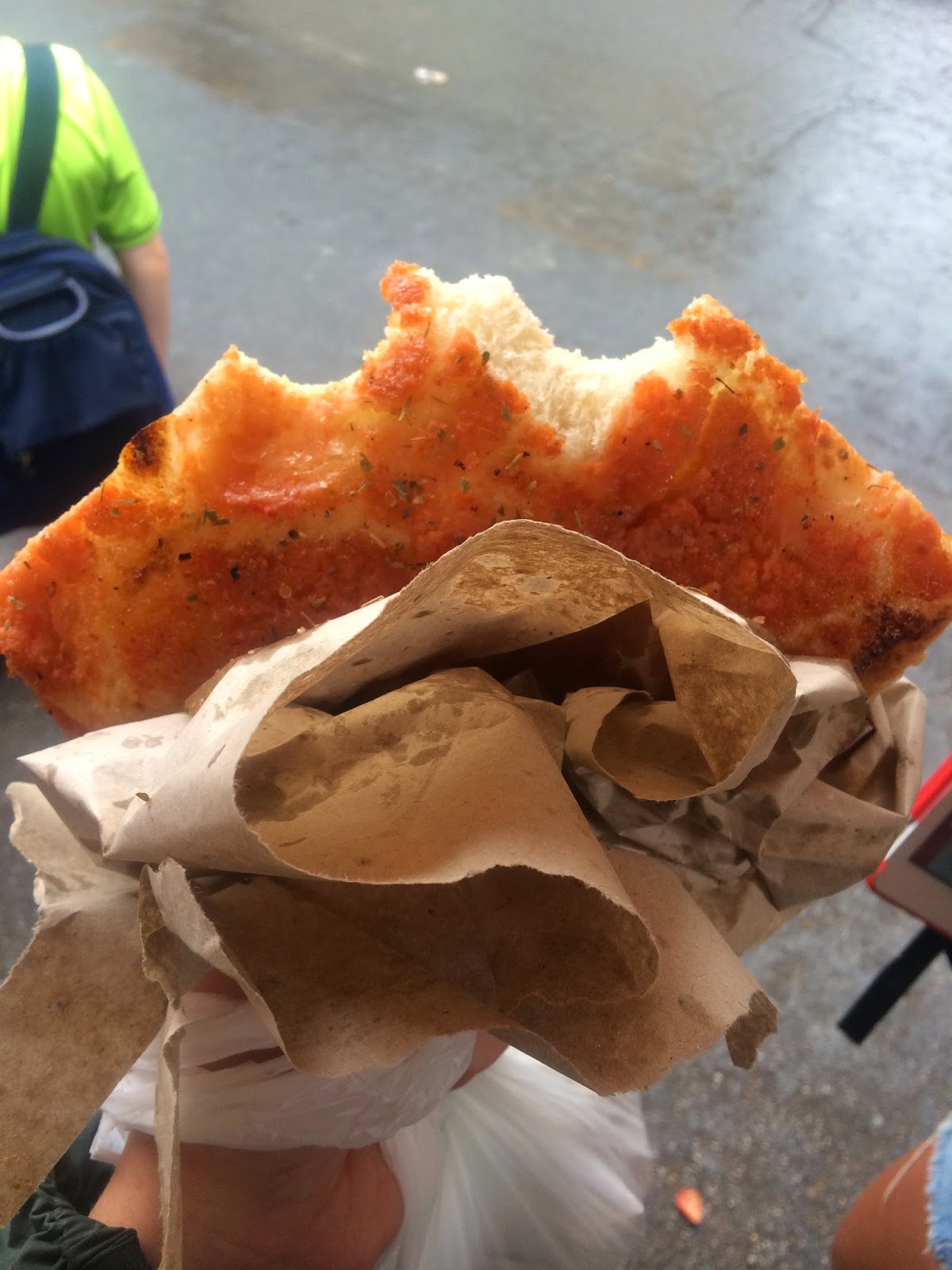 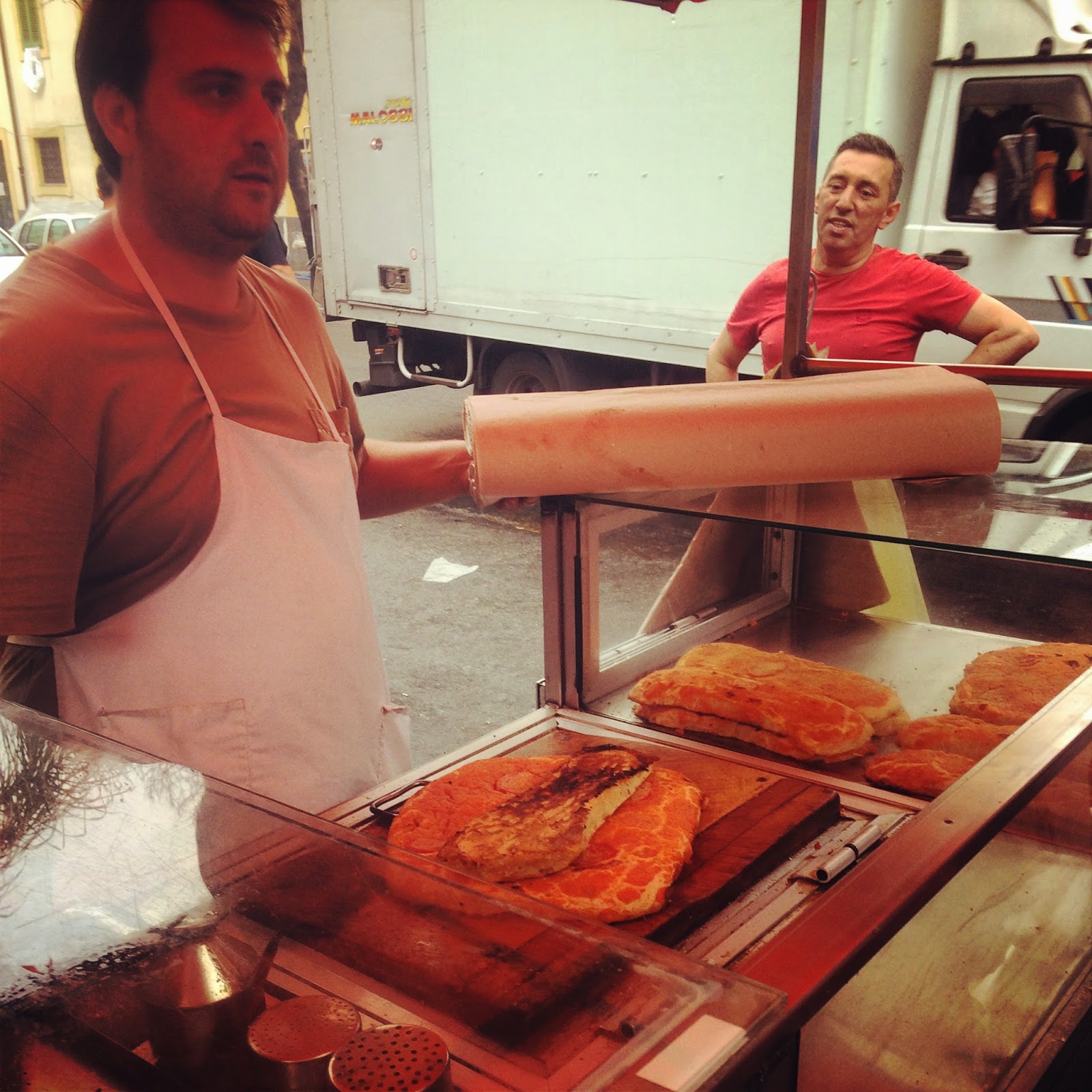 We also made our way through the Ballaro Market - another great place to stock up on local produce. It's not as big as the Capo market, but the food offerings are just as spectacular. 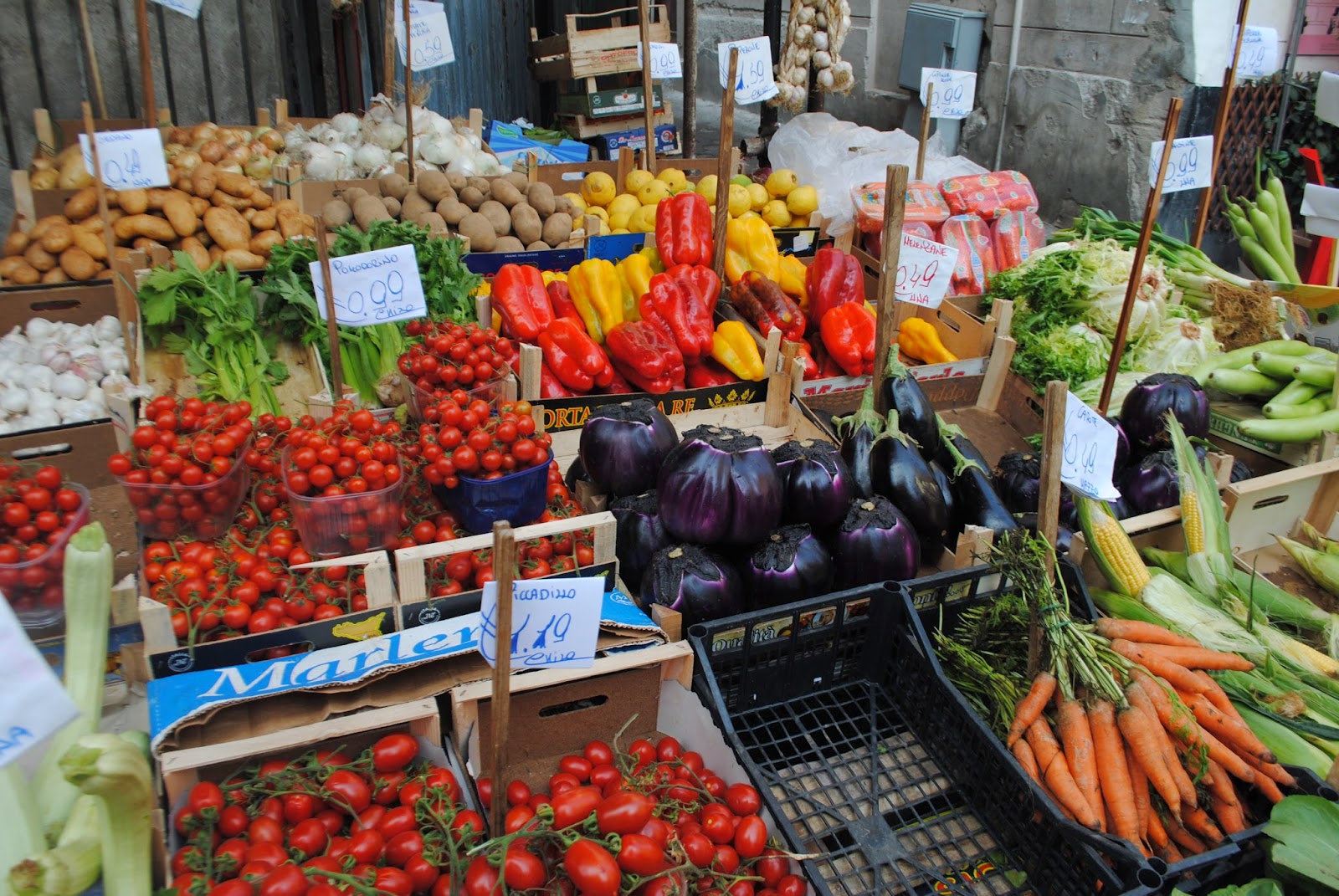 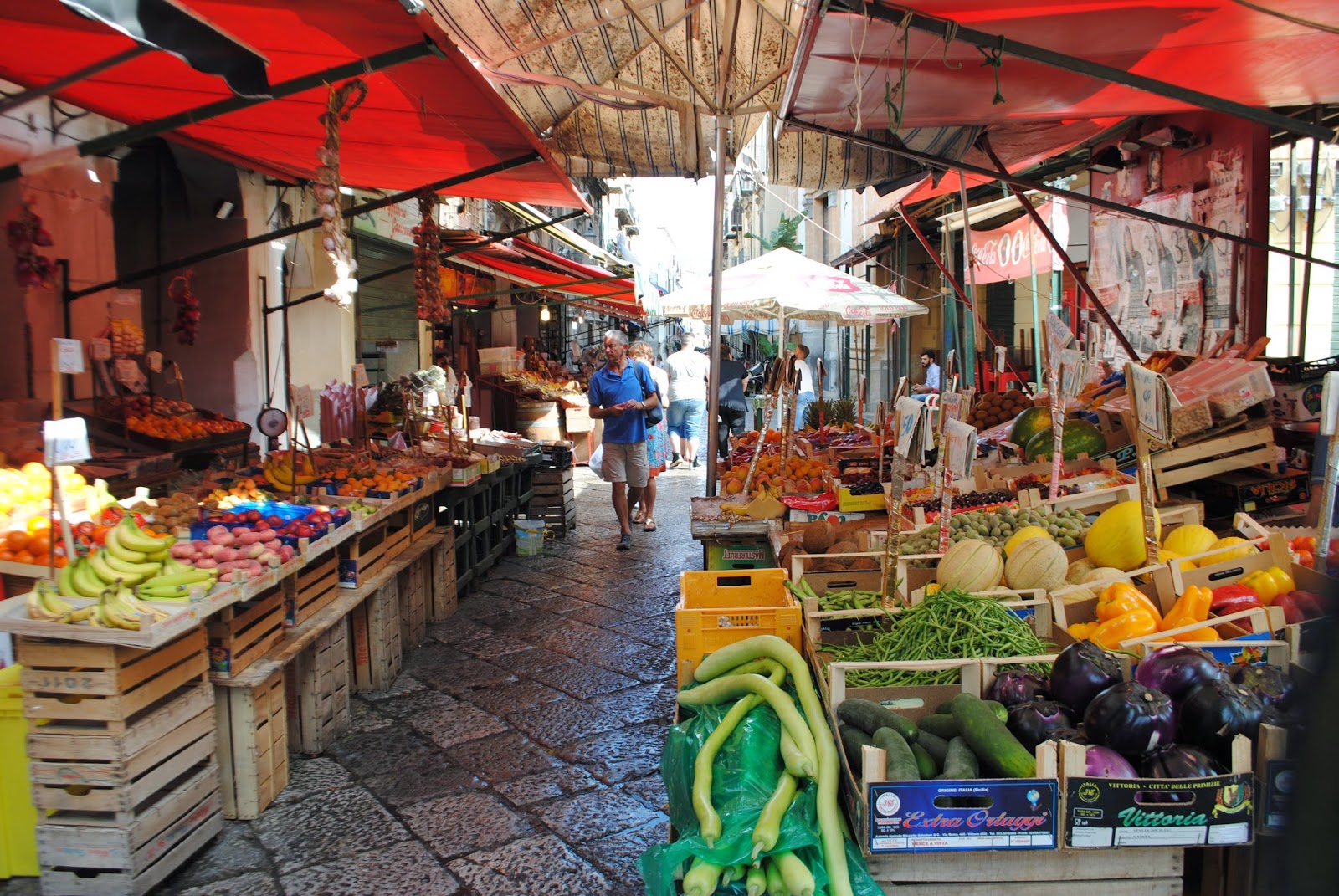 While on our little walking tour, we also got to see some of Palermo's more famous buildings. I have to admit, that Palermo looks much better in the sunshine than it does in the rain. That first afternoon, everything was overcast and the buildings looks grey and dull. In the evening, the sun came out and those dreary colors turned to golden browns and warm terracottas -- much better! Even the palm trees were swaying with a little more energy. 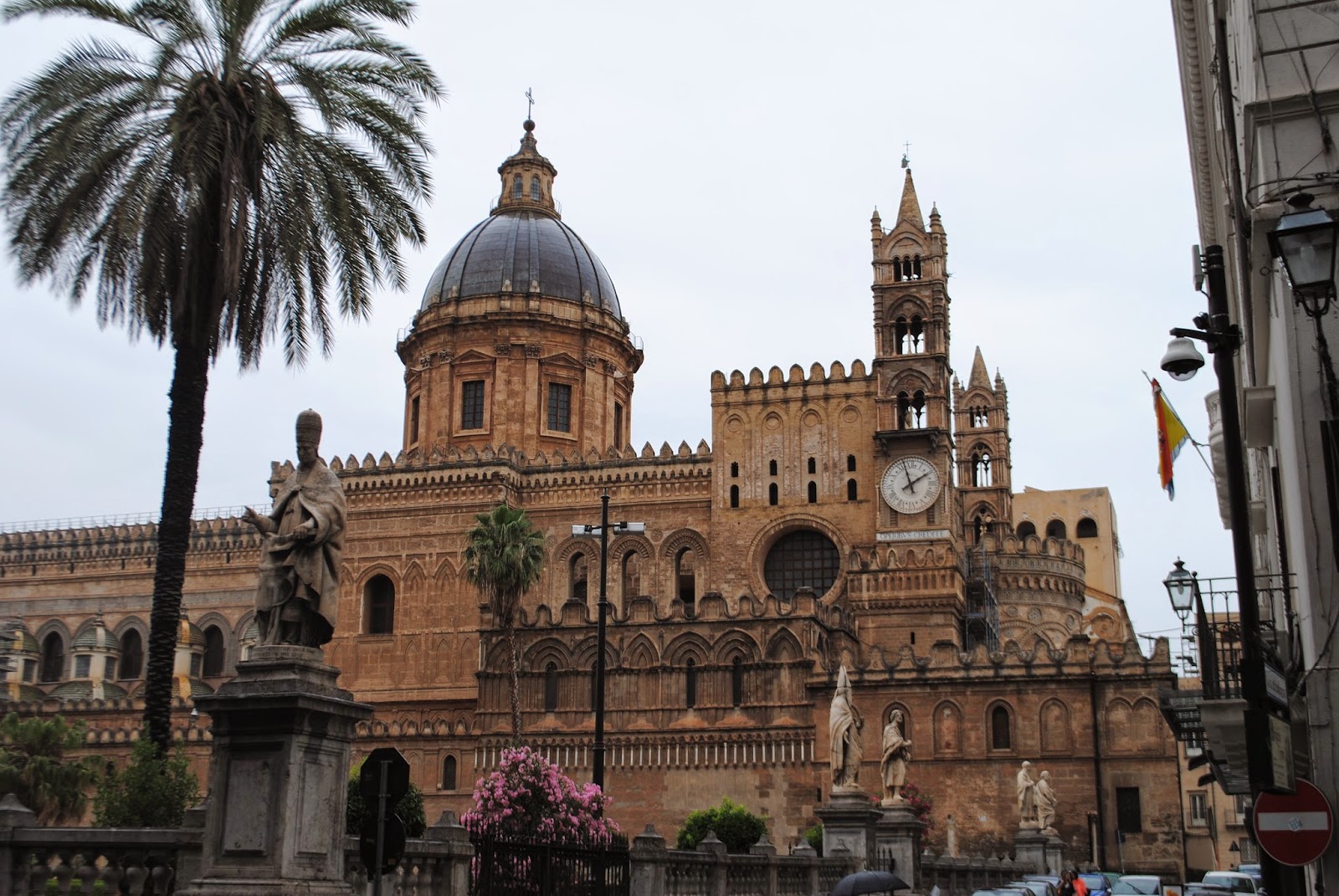 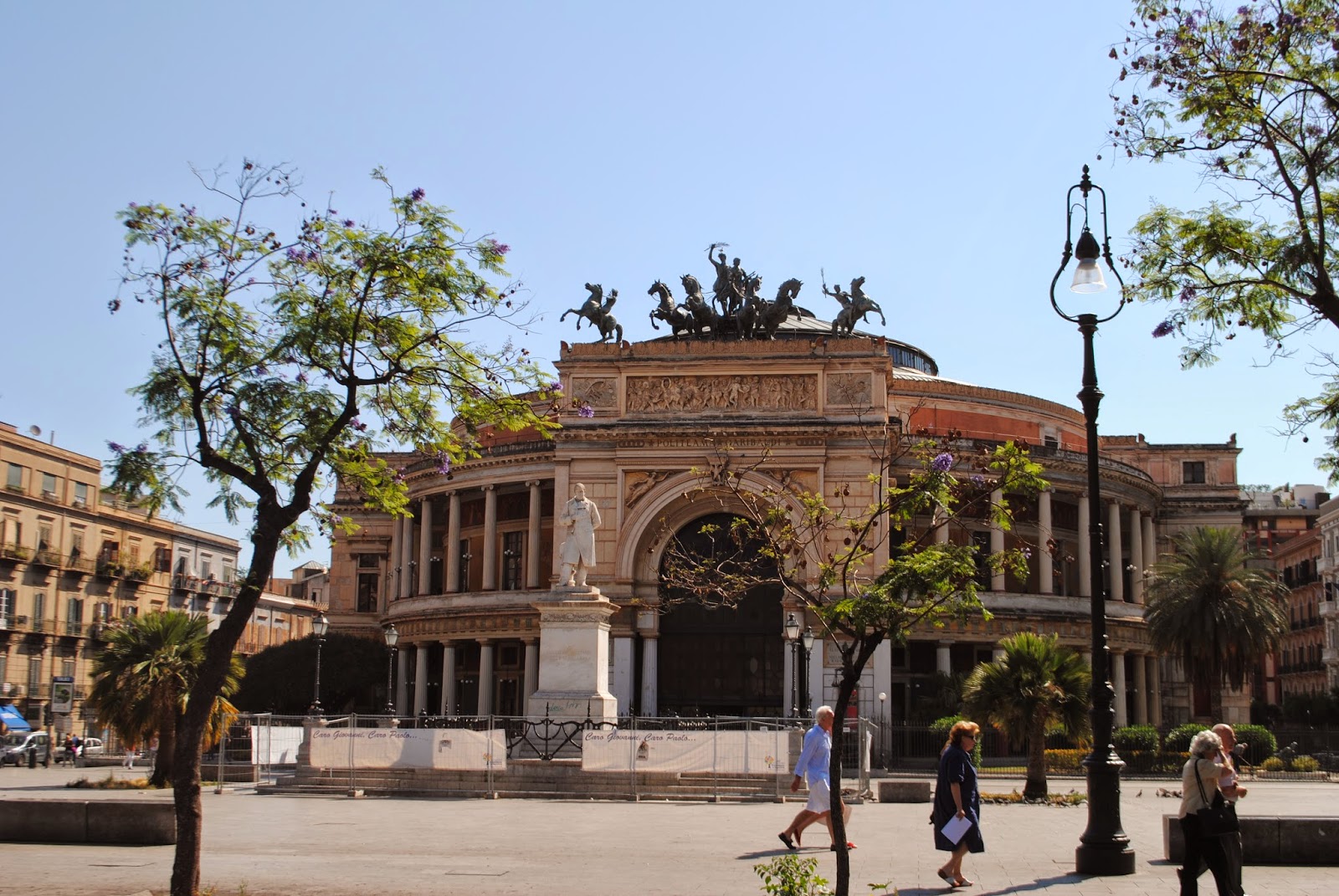 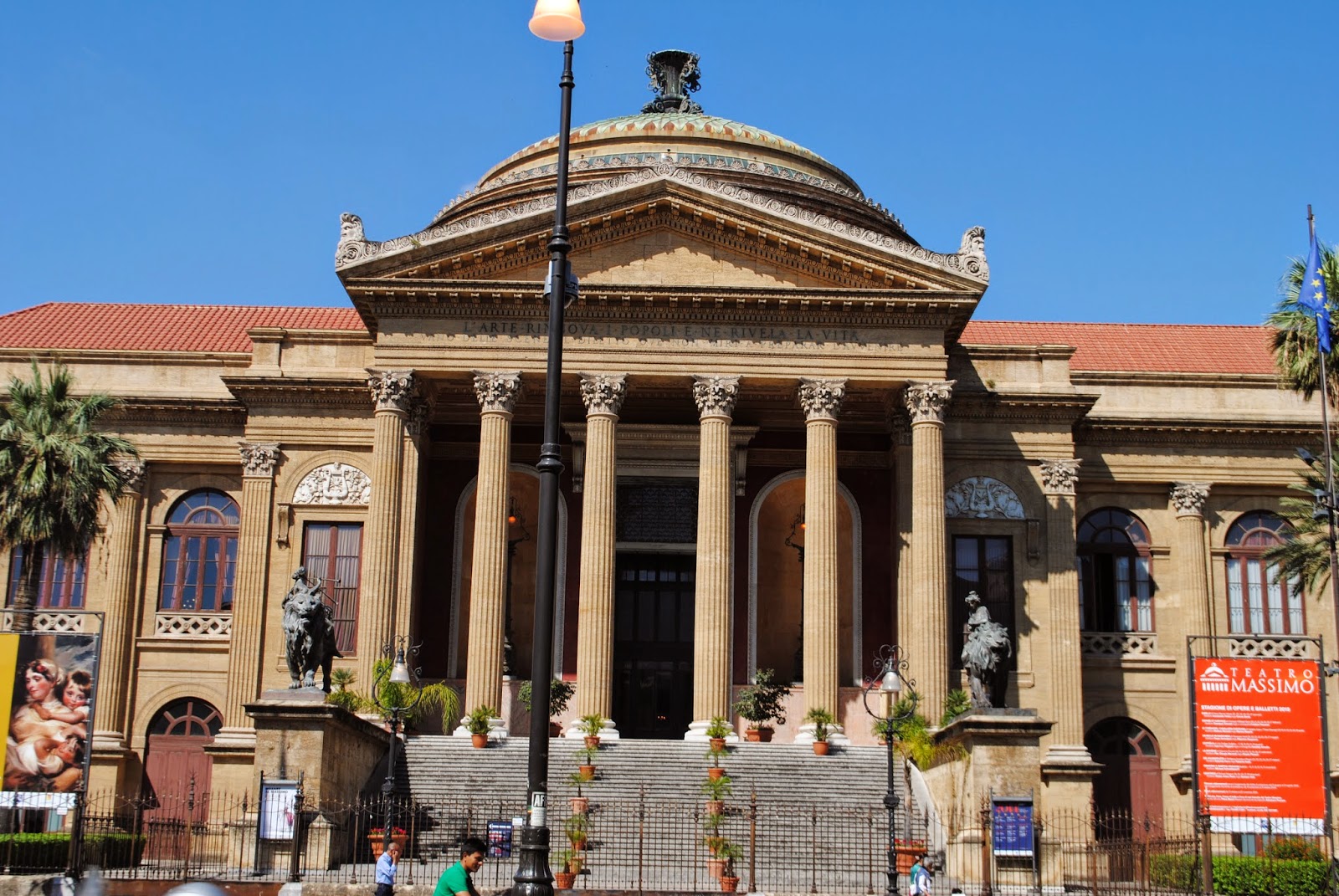 That evening, we ended up going to a wine bar for aperitivo and then out to dinner at a highly recommended seafood restaurant called Piccolo Napoli (which was later referenced in a talk at the Oxford Symposium on Food and Cookery). The aperitivo was fabulous - we were in a really hip place with a great back courtyard that was full of locals. I think we were the only people speaking English there (always a good sign). 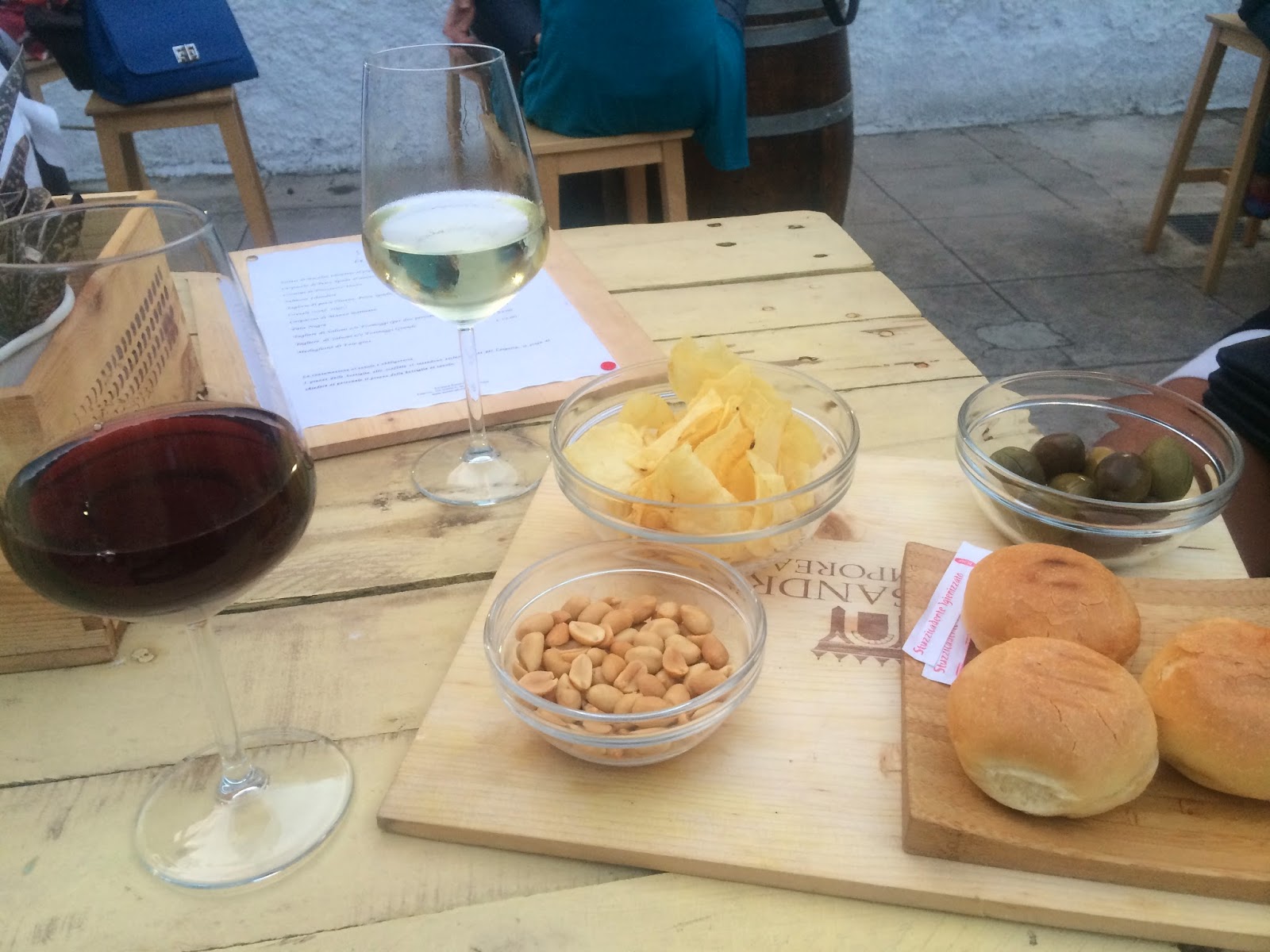 Then, we made our way toward the harbor and Piccolo Napoli in Borgo Vecchio. When we walked in, I immediately noticed the fresh seafood bar to our left where fishes stuck various positions of rigor mortis lay carefully packed on crushed ice. The owner sat us at a table in the center of the restaurant where we had a good view of our fellow diners. Jess was feeling a bit adventurous and ordered polpo bollito. My favorite part was when the owner walked her over to the fish bar to pick out an octopus. Once she did, he triumphantly held it up for me to see and approve as well. I shook my head enthusiastically and gave a somewhat queasy thumbs up as the creatures limp limbs wiggled back and forth. About 15 minutes later, the owner brought out our starter -- the octopus -- on a plate. He said to us, "No sauce! Just natural. No butter, no herbs, no nothing. This is the way we Sicilians eat octopus." Jess and I shrugged our shoulders and dug in to our little rubbery friend. I honestly didn't know what to expect. I hadn't ever had an entire octopus before. I imagined it would be chewy...and it was. At one point, the owner came over with a somewhat concerned look on his face. He asked us if we needed any help eating the octopus. We said we were fine. He asked again if we needed help and then asked if he could cut it for us. After exchanging a somewhat bemused look across the table, we agreed. He then brought over this huge chefs knife and pierced the head of the Octopus; ink when squirting all over the plate (and all over the my arm). He then scraped out the intestines and brain etc. (He shook his finger at me and said, "No eat!") After expertly dissecting the octopus, the owner looked up at us and grinned. "Now you are ready to eat!" That's when everything clicked into place. No wonder there was no sauce - the ink was supposed to be the sauce! Admittedly, the ink went really well with the natural flavoring of the octopus. It wasn't too strong or potent -- just a slightly stronger, more complex taste that the plain octopus. Will I be trying this dish again soon. Probably not. But, I would think about having it again if I were in Sicily (or near a coastline). 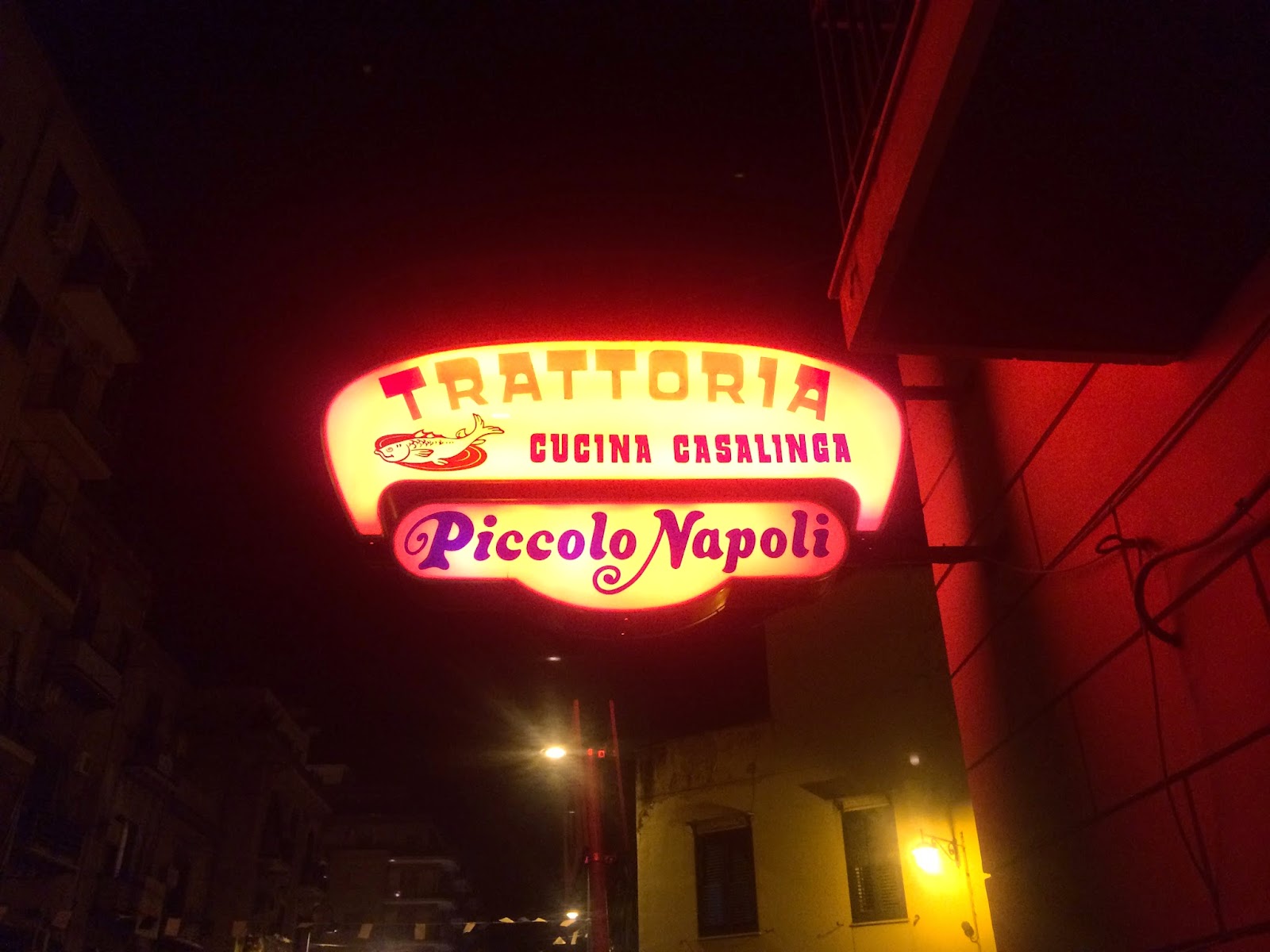 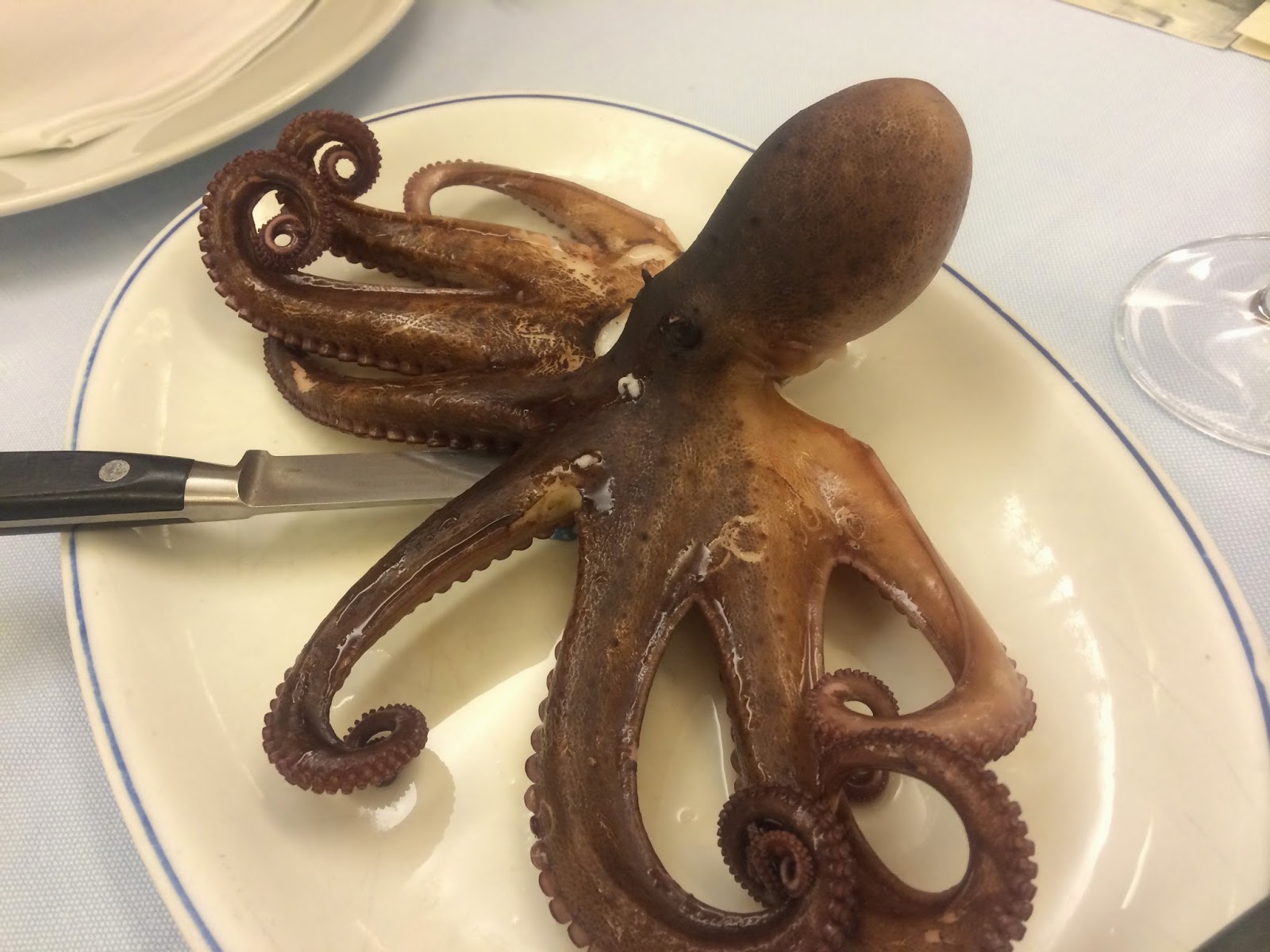 Our main dish was so wonderful. We had involtini di spatola -- filets of scabbard fish braised in a savory-sweet white sauce with pine nuts and currants. After dinner, we meandered back to the hostel to grab some much needed sleep (although, the rest of the city was up watching the World Cup). After all, we had a huge day ahead of us - we were planning on venturing out of the city to one of it's wonderful neighboring beaches.
Posted by Ashley's Adventures at 19:14