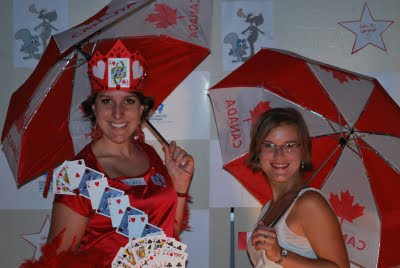 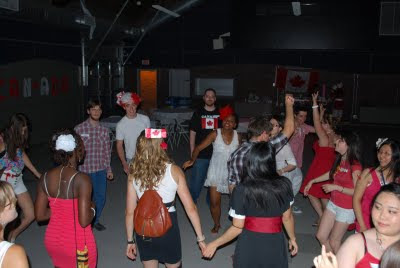 For the past few weeks I have been living in Trois-Rivieres, Canada to attend a French immersion program. I'm here with my fellow Duke classmate, Trish. We are having a fantastic time speaking and learning French! I thought I would catch y'all up on what has been happening over the past few weeks...
July 1 is Canada Day and L'École internationale de français de l'UQTR hosted their first fête (party) in the theme of: Rouge et Blanc (red and white)! All of the students at the immersion program crafted costumes, donned Canadian flags and prepared for a night of dancing.
I went to the party as the La dame de coeur (The Queen of Hearts). There were many fun costumes: pirates, maple leafs, Pierre from Ou est Pierre? (the French version of Where is Waldo?) A few of my friends and I won prizes for our costumes: tickets to see Eclyps (a theatrical and circus spectacle in Shawinigan, Canada). On the following Wednesday, we took taxis to the next town over and attended this amazing show! The spectacle is based on the story of the citizens of the moon who are threatened by an upcoming eclipse. These moon citizens send a messenger to "the green planet" to find someone to believe in the moon people (because belief in their existence will magically save them). The show ends happily with a little boy saying, "Je crois, je crois!" (I believe, I believe!)
The theater of Eclyps was situated outdoors on a rotating stage. The backdrop of the first few scenes was sunset and a few moments of twilight (beautiful!) Then the stage turned and the forest was lit spectacularly for the scenes which depicted the birth of the universe and the creation of the moon by the "ancient mysteries." I would liken Eclyps to Cirque du Soleil with its bizarre costumes and quirky plot. The circus aspects of the spectacle were absolutely fantastic! My favorite part was a scene involving trampolines and nearly a dozen individuals bounding off of a series of trampolines in synchronization!
Here is the link for the show:
http://www.citedelenergie.com/fr/index.aspx 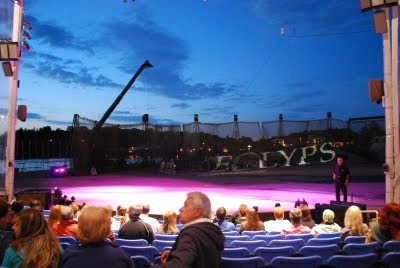 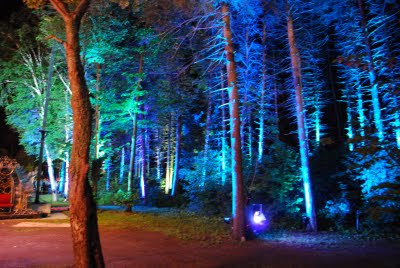 Posted by Ashley's Adventures at 17:14