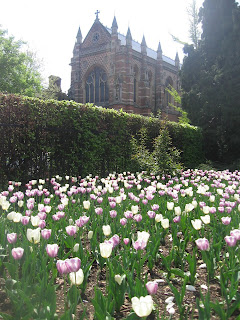 May Day just past recently and Oxford fully embraces the pagan rooted traditions in the celebration of the first day of May the mid point between the Winter and Summer solstices. Celebrations begin the night before as students attend black tie events at the various clubs in the City center. General merriment continues throughout the night until daybreak where all of Oxford makes the pilgrimage to the Magdalen bridge to hear the Magdalen Choir sing from their tower to greet the sunrise. Morris dancers dressed in traditional garb parade up and down the bridge rejoicing in the rays of sunshine breaking over the gently rolling hills of Oxfordshire. 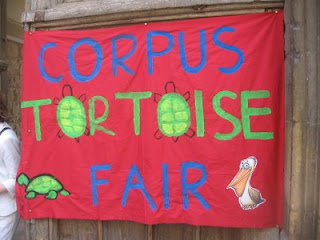 The following day Corpus Christi College hosted their annual tortoise fair. They opened up their fortified gates to the general public of Oxford. The smell of BBQ was tantalizing and the colorful balloons and life symphony orchestra music weaving its way across the courtyard and out into the street invited passerby to come into the college and explore. Some of the best music selections included the theme to James Bond and a medley of Disney songs (i felt like I was in Anaheim California at Disneyland at one point!) 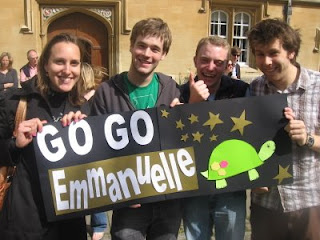 The big event of the day is the traditional Oxford College tortoise race. 14 or so of Oxford's 44 colleges have tortoises living in their courtyards. Regent's Park's tortoise is a 90 year old lady tortoise named Emmanuelle. If you look carefully you can normally see her sunbathing under the wisteria bush in the corner of our courtyard or snacking on fresh fruit fed to her by Regent's students who are drinking Pimm's and playing croquet on the college lawn. 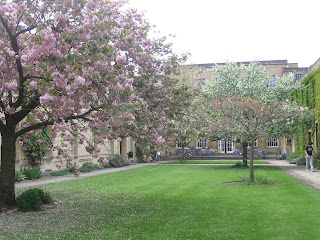 We had high hopes for Emmanuelle this year because she got 2nd place in the race last year. When it came time for the race we all stood behind the banner we made for her and cheered for her from the sidelines. There was a HUGE crowd so it was difficult to get a good view of the race, but in the end Emmanuelle came out VICTORIOUS with 1st place in the final round! 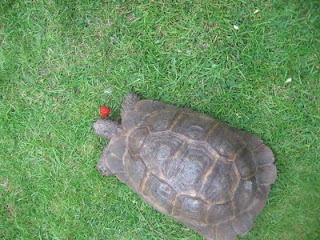 Posted by Ashley's Adventures at 10:32