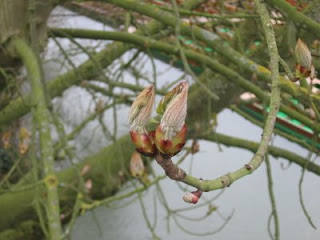 I had the most magical walk today in Oxford! After I triumphantly turned in my last essay for the term, I decided to stroll around the town and take in the sights. I meandered down to the French farmer's market in Gloucester Green and had a quick yet exciting conversation with one of the vendors in French. I told him that I was heading to Paris in just over a week, and that I was excited to see my family. He was a very nice man and I am glad to have dusted away some of the cobwebs that no doubt started to cloud my ability to speak french.

I went to one of my favorite cafes and grabbed a hazelnut steamer- sipping my favorite drink as I let my thoughts flutter and float away in the surprisingly warm wind. The sun was brilliant and I wished I had thought to bring my sunglasses.

After I left the cafe, I went poked my head in and out of some shops along the main drag of town and I finally found myself heading towards Christ Church Meadows- a 150 acre plot of land that boarders along two of Oxford most charming rivers: the Iris and the Cherwall. 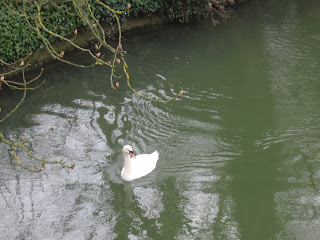 The hard-packed earth paths were riddled with excited school children, joggers, and even the occasional couple- we were all reveling in the magnificent day. I took the path that snaked along the east wall of Christ Church College and then made its way down to the Iris where I watched several of the rowing teams practice. There is something mesmerizing about the beat of their oars in time. I was surprised at how quickly the boats were able to move up and down the river, and I have to admit I fancied myself as a rower- for however a brief moment.

I then followed a side path that wound its way along the smaller of the two rivers, the Cherwall. It was a completely different atmosphere that the main path- a hidden Eden if you will. Daffodils were blooming in little pockets across the ever greening grass...they were like little yellow traffic lights signaling to the world that it was almost time for spring! 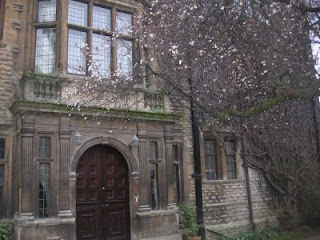 In this small oasis the birds were singing at full force. A symphony of bird calls that were so magical in the ambiance of the late afternoon. On the twisting river, that looked more like a stream, there were many people punting. Punting is when you push your boat along a waterway with a large pole (like they do in the canals of Venice). Its quite entertaining to see people trying to master punting- its more difficult than you might think. As I rounded one corner of the path I saw two friends punting and one of them lost his balance and fell into the water! It was quite a comical scene and he took it well. Many of the people walking along the path had a good laugh.

The path took its final turn towards the Botanic Gardens which gave me a fantastic view of the spring flowers. It was a perfect walk that made me realize that my time here at Oxford is flying by...and for the first time I realized that things were moving too quickly! I am leaving for Germany in 3 days and by the time I return to Oxford in 5 weeks time the trees will be covered with green foliage, the streets will be overcrowded with tourists, and I will be able to put my coat into retirement as summer washes over the cold stone walls of Oxford.
Posted by Ashley's Adventures at 13:26